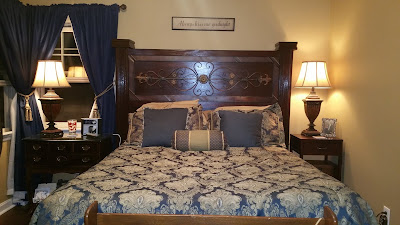 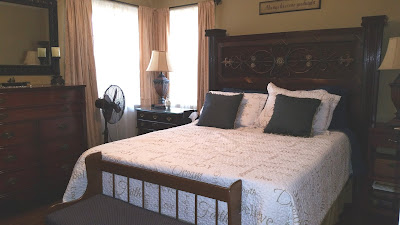 I adored my old comforter, but despite having two windows, I don't get much natural light in my bedroom because of the orientation of the windows and all the trees outside. My furniture and floors are all dark wood, so I really felt I needed to find a lighter comforter or quilt to give the illusion of light. I've been on the lookout for new bedding for a while, and I finally found some that I like and works with the existing paint. I painted this room before I moved in, and painting it again would mean moving this massive bed and painting the bathroom as well. If necessary, I would have painted, but I was hoping not to have to.


Last year, I bought two sets of navy sheets to go with my existing bedding, and they were quite expensive, so I wanted something that I could use them with. I may change my mind about the navy sheets and pillow cases, but for now, I'm going to use them ... for a pop of color if nothing else. I like the blue drapes, but they still made the room too dark ... 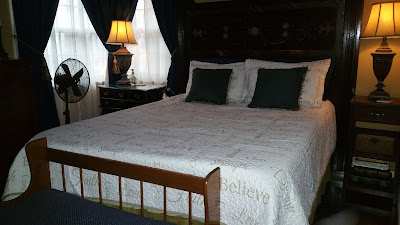 So I changed the navy out for white black-out drapes. They do make the room look brighter, but I'm not so sure I like them. It seems too stark or something ... and it's WAY too bright when the sun comes up. These drapes, while pretty, are worthless as blackout drapes. And the gold sheers looks white ... so back to the store. 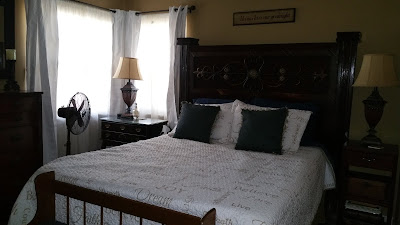 I settled on gold black-out drapes. Despite promising 99% light barrier, they aren't as light filtering during the day as I would like them to be, but they look much better. The only time I need it really dark in there is for the grandkids naps. They sleep better when it's dark. I'm hoping these gold ones will be enough to let them get the sleep the need.

CLOSE-UP OF THE NEW BEDDING ...
All in all, it's a much brigher room during the day, and it's plenty dark at night. Even so, I still like my old bedding better ... and we'll just have to see how well they work at naptime!
Posted by Jackie Coleman - Author at 5:37 AM