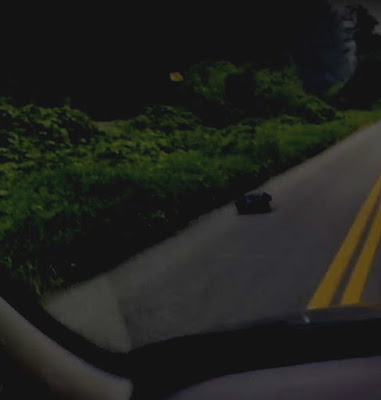 When I leave for work in the morning, it's pitch black. The streets are nearly deserted, so it's a pleasant, quiet drive ... most of the time. Every once in a while, I'll see something in the street far ahead, and I panic. Big time. Is it a body? Did someone hit this person and leave them to die like the person who hit and killed my son, then drove away to keep from getting caught?

I always slow down to take a good look, to make sure it's not someone who needs help. It's always been a garbage bag or some other discarded object, but it takes a long time for me to calm down.

It's been 7-1/2 monthes since Davy was killed, and we are no closer to finding out who did it. My prayer is that I will find out who did that to my son while I'm still alive, but as each day passes, the reality is that they will never be found.

Sometimes, when I'm at a stoplight, I'll look over to the next car ... full of 20-something's like my son, and it makes me so sad. How come those kids get to live and my son had to die? I don't wish anyone to die, it just seems so unfair that it was my son that God called home late at night on June 22, 2018. I was the mother standing in front of the coroner and a deputy in the wee hours of the morning on the 23rd. It was my legs that buckled and forced me to sit on the cold concrete porch, shaking my head "no", telling them they were wrong. It wasn't my son they found. God had a plan for my son ... he would never take Davy before he had completed whatever mission He had for him.

I was in shock and denial for months. I knew he was gone, but it didn't seem possible. It still doesn't seem real. My son CANNOT be gone! But he is. I honestly don't remember much of last year. I was just going through the motions.

Despite my pleas to God to let me go back to the day of his birth and raise him again, I wasn't angry with God or anyone else. I didn't even hate the person who did that to him ... I just wanted to know why they didn't stop.

I think I've now moved on from shock and denial to depression, not full-on depression, but a deep, profound sadness that won't leave me ... not even for a moment.

The picture I have of Davy in my living room, as part of his "shrine", is covered in my fingerprints around his lips. Every time I pass that picture, I kiss my fingertips then touch his mouth and tell him how much I love and miss him. I hear his windchime tinkle and say "Hi Davy". When I leave, I tell the windchime (Davy) where I'm going and that I'll be home soon. It's silly, I know, but it makes me feel good to "talk" to him. I know I'm not really talking to him ... I'm talking to a windchime my daughter bought me.

We had a really beautiful weekend and I spent much of Sunday outside, with "Davy" tinkling to me. I told him I loved his tinkles, but I wish I was hearing his voice instead.

Luckily, we have video's of him, so I'll never forget his voice, but I can only watch them for so long before I'm too emotional and have to stop. I know one day all the photo's and video's will bring me comfort, but right now, they just scream to me "YOUR SON IS DEAD. HE'S NEVER COMING BACK."

It's only been recently that I've given myself permission to cry. I didn't want to cry for Davy because that meant he was really dead, and I couldn't process that. Now, I cry all the time. Most times I'm in public or at work, so I have to fight hard to keep from bawling, but in the silence of my home, I cry a lot.

I lost my brother in 1975. He was 21. I lost my father when I was 25 and my mother when I was 35, so I know time has a way of making the pain not quite so raw ... but this was my son. There's a BIG difference in losing a parent or sibling and losing a child you grew in your belly and gave birth to. He fed at my breast and he fell asleep in my arms every night when I rocked him to sleep. He'd RUN to my room when he woke up to give me a big kiss and hug (all the kids did).

I never left the hospital when he was hospitalized for Intussuscption when he was three years old. They had a surgeon on standby if a berium enema didn't push the bowel stuck inside itself. Fortunately, it did, and he didn't have to have surgery ... but I'll never forget standing outside the procedure room and hearing my little boy calling for his Mama ... and they forbade me to enter.

I never left the hospital when he was hospitalized with the flu when he was four years old. He needed a nap, but he didn't want to sleep, so I crawled into bed with him and held him, his little arms wrapped around me. He fell asleep in no time.

I was there through all the bad times, and I was there for the good. I got to see his excitement on his birthday, Christmas, Valentines Day, Easter etc., when he opened his presents. I got to be there when he saw the ocean for the first time. I was the one who helped him learn to ride a bike. I was the one who took him to swimming lessons and was amazed at how fast he learned to master swimming. I got to see the complete and utter joy as he watched the Blue Angels fly over the riverfront.

Davy was so funny. He had a wicked sense of humor. He often said something so funny I was laughing so hard I cried. He also had a huge heart. The last time I took him to Louisville to have his arm looked at, he brought me some cookies ... because he knows I have "a cookie problem".

I miss my son. I miss his jokes. I miss hearing him laugh. I miss talking to him. I miss him telling me, "I love you, Mama". I even miss his "painful" hugs.

The only consolation I have is that Davy was a born again Christian, and I know full well he is in Heaven, and that I will see him again one day.

My daughter pointed out to me that God knows exactly what I'm going through, because He went through the same thing. He had to watch is only son die an excrutiating death on the cross. Jesus suffered greatly, but Davy was killed instantly. At least I didn't have to watch Davy die in profound pain.

When I get to Heaven, I'll have the answers to all the questions swirling around my head. I will know why God called Davy home that beautiful summer night. Until I'm called home, though, I'll just have to trust that this was all part of God's plan. I don't understand right now, but one day I will.
Posted by Jackie Coleman - Author at 5:10 AM