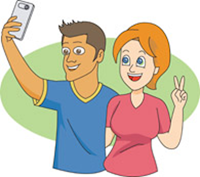 Between January and September of 2015, twelve people had died when taking a selfie, while "only" eight died from a shark attack during that same period.

Unlike the rest of the world, when I take a selfie, I'm very careful not to get myself in the frame. I took a bunch of selfies when I "babysat" Thing 1's new puppy. He was sleeping on me and he was so darn cute! 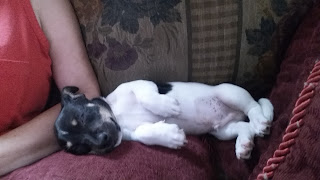 I also take selfies when I'm holding my baby grandson ... who is even cuter than all the puppies in the world combined! 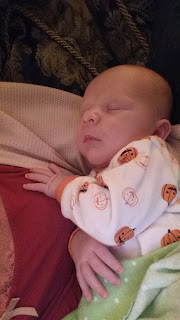 I'm very careful to get as little of me in a photo as possible. I've never been particularly photogenic, and as I age, I'm even less so. My kids want pictures of me, but I want pictures of everything but myself.

The generation growing up now will grow up with photographic evidence of nearly everything they did ... every day of their lives. My memories are in my head. My kids memories are on their phones ... and all of their memories disappear if they lose or destroy their phones before they've downloaded (or uploaded) their lives.

Until the advent of cell phones, I was generally the one with the camera. My life is documented by the photographs I took ... none of which contain me ... and that's okay. I don't need a picture of myself at Amicalola Falls to know I was there. I can look a my pictures of the water cascading down the side of the mountain and hear the roar of the water rushing over the rocks in my head.

It is now a scientific fact that one is more likely to die from taking a selfie than they are from a shark attack ... except for me ... I still have to worry about the sharks.
Posted by Jackie Coleman - Author at 9:39 AM