My driveway is one bumpy ride! It's needed grading since I moved in, but I never felt compelled to spend a couple thousand dollars on it, so it's stayed bumpy.

There was one particular bump that drove me (and likely, everyone else) completely nuts. Last summer I took a shovel to it, but it was like concrete, so that was that. I told John I was going to wait for a good rain, then tackle it with a hoe. He said the ground underneath would be like concrete, too, and that I'd never be able to fix it myself. He was right in that the ground was like concrete, but I was able to do something about it!

It was either do something myself or pay someone a lot of money to do it for me, so I got out my trusty hoe and got to work. It needs a lot more attention to be a smooth ride, but the biggest bump is smoothed out (mostly), and it makes the ride up the driveway much less bumpy.

It's hardly what you could call "graded", but it's a start! I don't have any "before" photo's, so the pictures below don't portray the hours it took to chip away at that bump! 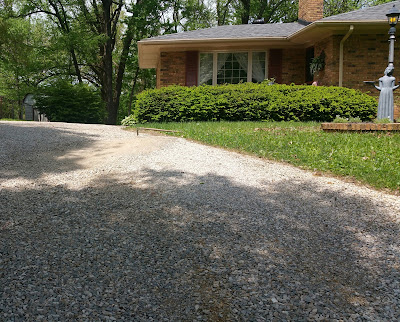 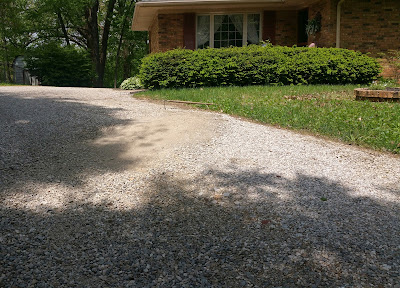 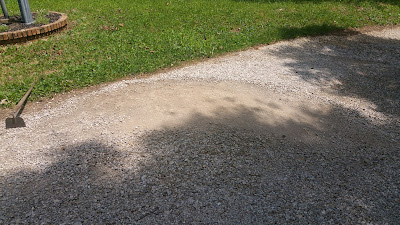 After I tackled that bump, a blew all the leaves on the side of the house by the woods into a pile. I should have done it last fall, but I didn't, and I could have cut them up with my lawnmower, except the belt for the self-propelled quit working. The part is ordered, so until it comes in, my lawnmower is on sabbatical.

The plan is to burn the leaves in the outdoor fireplace, but it was too late to start burning when I finished ... because it's a huge pile that will take a long time to shovel into the fireplace!

Posted by Jackie Coleman - Author at 8:04 AM