It's hard to describe the sound of hail pelting a house ... but it's loud! I don't think I sustained any damage to the roof, which is surprising given the amount of hail that fell and the length of time the storm lasted. I took some pictures and a couple video's when it was hailing. The pics and video's don't show it, but it was pretty intense!

Thing 1 was heading over with her baby for me to watch for an hour or so. I called her while she was on her way. I told her to either come here and stay or go back home. It looked like the storm was only going to get worse, and I didn't want her on the roads with that sweet baby or driving during a dangerous storm to get back to him ... I wanted her someplace with a basement!

Just as she got home, the hail was beginning to subside at my house, but it was just beginning at hers. The storm wasn't that bad as predicted (aside from the hail). I was really looking forward to seeing my baby grandson, but not if it put my daughter's life in danger! Plus, he's only ten months old ... if the hail hit him, it would hurt! 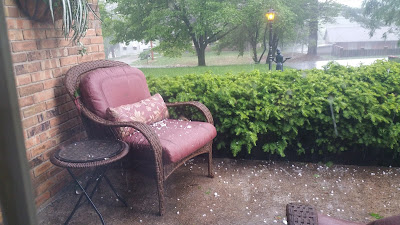