The Month of May

I no longer consider myself Catholic (I'm now just a Christian ... a non-denominational Christian), but my parents were both Catholic, and they raised us kids as such during our childhoods, including sending us to Catholic schools. Luckily, I only had to go to Catholic schools first through third grades.

During the month of May, the entire school gathered in the schoolyard around statue of Mary and prayed the rosary after church. Every. Single. Day. I have no idea if there is any "Catholic reason" for doing that in May or if simply "May" is as close to the month of "Mary" as they could get. Anyway, I hated saying the rosary.

For those of you who don't know, you have to pray a prayer for each bead on the rosary. Try as I might, I could never stay on the same bead as the nuns. Honestly, I don't think the nuns could stay on the same beads and the other nuns, either! Sometimes saying the rosary would take an hour. Sometimes it would take 15 minutes. On those days (YEA!), I don't know the nuns got confused and thought they were on the other side of the rosary and almost done, or they did it on purpose. I didn't care or understand why we said the rosary. I found it beyond boring. Aside from The Lord's Prayer, the prayers meant little ... they were simply memorized and regurgitated. Every day I hoped it would be a day the nuns got lost and finished quickly.

When I pray now, I pray in my own voice ... not the prayers the Catholic church tells me to pray. I mean no disrespect to devout Catholics, but I find the rosary and the made up rules of that religion (that change on the whim of the Pope) contradict the Bible in so many ways.

Below is a diagram of the rosary, along with the prayers we had to say on each bead. Looking at it, I'm sure you can see how it's easy to skip ahead a bead or two and get lost! (Click on image to enlarge). 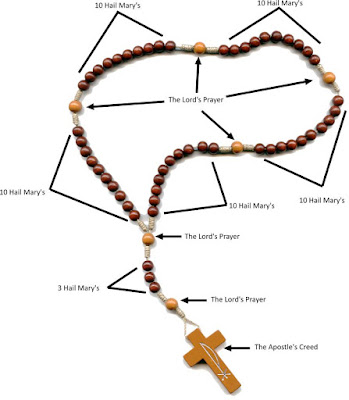 Posted by Jackie Coleman - Author at 6:59 AM