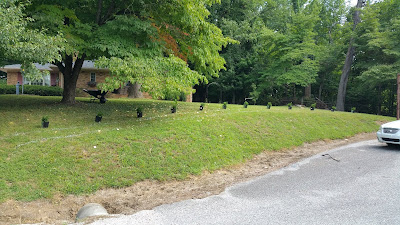 I bought a dozen boxwood bushes to plant on the top of the hill. The plan is to plant the hill with vinca vines, leaving a row of grass at the top so that I can cut the vines to keep them from overtaking the yard.

After marking a lane of grass, I placed the bushes where I wanted to plant them ... nothing so scientific as a tape measure was involved ... just good old fashioned "Uh, yeah, that looks about right!"

My neighbor lent me his post hole diggers, but after breaking through the grass, I found it easier to dig with my trusty big spoon. 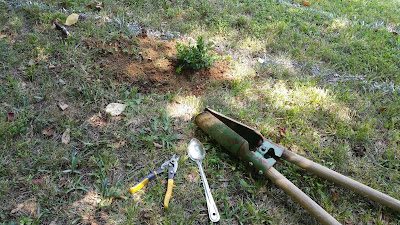 The endeavor wasn't without mishap. I opened an existing cut on my arm and bled all over my arm and gloves. It looked worse than it was. 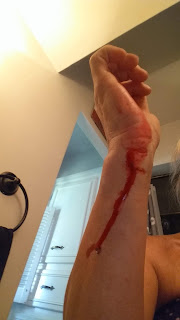 After a quick wash, gauze, and a self-adhesives ace bandage, I was back outside working away.

Between the heat, which meant a lot of trips inside for ice water and to cool down, tree roots, the physical labor, and one very determined sweat bee, the project took a lot longer than anticipated.

I would be remiss if I didn't mention the fact that it takes a lot more upper body strength (and height!) than I possess to get a good bite of earth with post hole diggers. I had to wedge myself between the posts like an insurance salesman trying to stop a door from being slammed in his face!

I don't know if my neighbors peeked out their windows to watch me, but it would have been more entertaining/comical than a lot of stuff on television! I have a very unique way of getting a job accomplished sometimes, but I never quit ... and in the end, my hard/quirky work always pays off.

The shrubs looked much more 'substantial" in their pots than they did in the ground, but they'll grow. One day they'll grow together to form a nice hedge, and the vinca vines will remove the need to cut the grass on the hill.

I have some vinca vines to plant, but not nearly enough for the entire hill. I'll plant what I have Sunday, with a trip to the garden center to see if they still have any left. The vines look a little worse for wear and tear, but vinca vines are virtually indestructible. They spread quickly, they're full, and they choke out weeds.

I hadn't planned on undertaking this project until next year, but when I found the boxwoods at such a good price, I couldn't pass them up.

My neighbors paid me a nice compliment, too ... they've seen me toiling away in my yard for three years now, and said, "You're a worker, that's for sure!" That made me smile. I'd hate for anyone to think of me as lazy.

So here are the less than impressive photo's I took when it was all said and done. I did my best, but it's really hard to to photograph small shrubs over a vast expanse! 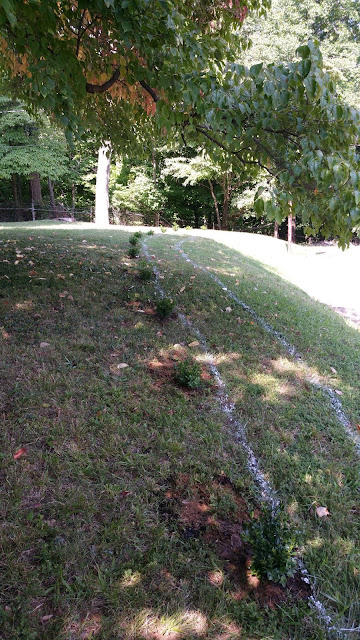 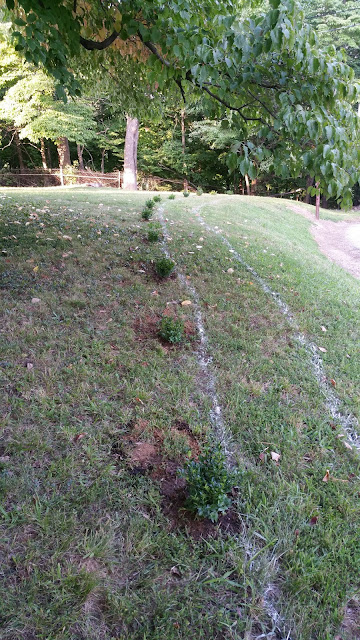 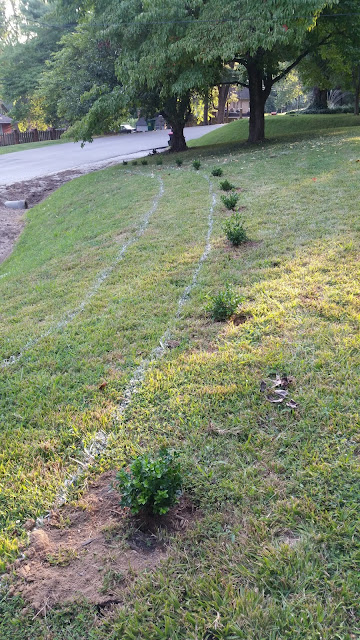 After a quick shower, I'm ready for the evening. Keeping busy helps keep me from breaking down, so I keep thinking up projects to do. Even so, I think about Davy non-stop. I don't guess he'll ever be far from my mind. Such is my burden. The Lord apparently thinks I'm strong enough to weather this storm, but sometimes, I think he overestimates my strength.

Mother Theresa once said, "The Lord will not give you any more than you can bear. I just wish He didn't trust me so much."

If you know of a vehicle matching this description, please contact the Sheriff's Office TIP line at 812-421-6297 or leave a web tip here.
Posted by Jackie Coleman - Author at 8:01 AM