One Year Ago Today

Thing 2 called around 8:15pm and said Davy was at the hospital in emergency, that he had punched a windows and severed the artery in his right bicep. By the time I got to the hospital, he was in surgery.

At 11:30, the surgeon came out and told us they were able to repair the artery with a vein from his forearm. Blood flow had been restored and he had a pulse in that arm again. They couldn't do anything about the severed muscles and nerves ... that would require surgery from a specific type of surgeon in Louisville. He wasn't out of the woods, and there was still a possibility he would lose his arm, but for the time being, things were stable.

The next day, Davy was transferred to Louisville for surgery. Luckily, they were able to find the nerves and connect them together with cadaver nerves, and they were able to sew his muscles back together. The prognosis was good as long as he followed doctor's orders, but the pain was more than he could stand.

I spent the night with him in Louisville and listened to him cry all night due to the pain. There was nothing I could do. I tried to soothe him, but he was in no mood to be soothed, so I just had to lay there and listen to him cry and beg for something for the pain. With the opiate crisis, pain relief is hard to find these days ... even in a hospital.

His arm was wrapped from shoulder to fingertips, so we couldn't see the wound. At one of his doctor appointments, to get the staples removed, we got some pictures and finally saw the extent of the damage. 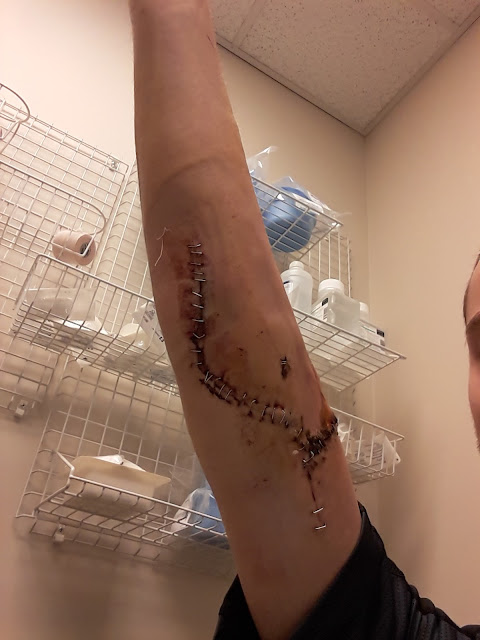 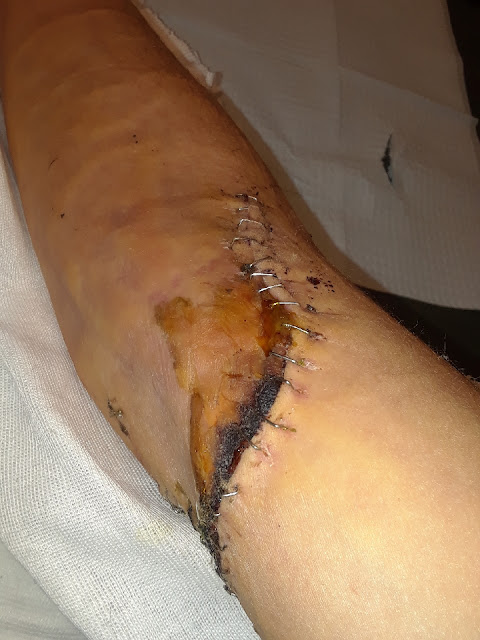 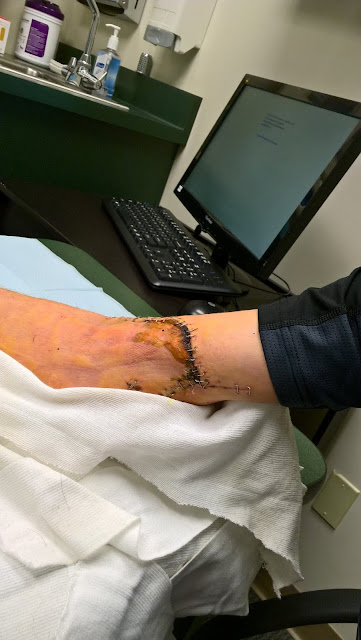 They gave him a brace that he had to wear 24/7 to keep his elbow in a certain position. Flexing his arm could cause the muscle in his bicep to tear. Sewing that, they said, was like sewing two pieces of steak together. It required total rest on those muscles until they had healed. 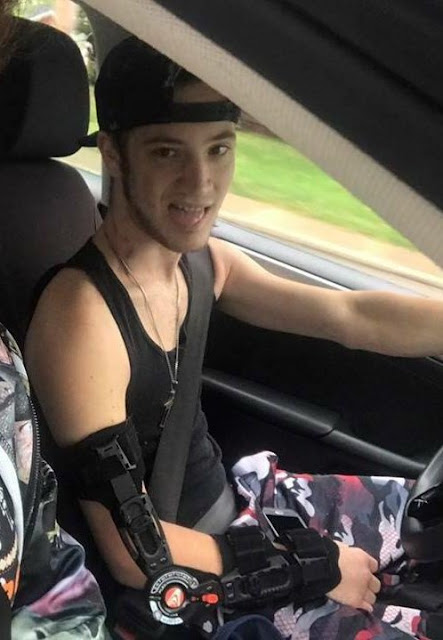 This crisis was just one in a long line of crises in Davy's life, but he pulled through all of them. Like most young men his age, he thought he was invincible ... and we were beginning to believe it, too. He was like a cat with nine lives!

As the months wore on, he astonished his doctors with his progress, but no one was certain he would ever gain the strength back in his hand. I didn't believe that at all, and I told him so. He was young and strong ... he could do anything he set his mind to. I told him to just keep doing the exercises the therapists gave him and I was positive he would regain full use of his hand.

Sadly, ten months after that accident, he was killed by a hit and run driver on I-69 South. We laid him to rest on his 24th birthday. I still can't believe he's gone. After all he went through, and all he overcame, to die alone on a highway seems beyond cruel ... and all because whoever hit him didn't want to get in trouble. Because they didn't stop, he was ran over again. I hope the person that hit him never knows a moment's peace for the rest of their lives.