Not Much About This Weekend Went Right

Friday I got a lot done, but Saturday was a little different. I got up early to have my coffee, water the plants, and go to the grocery before I got my grandbabies ... then I remembered the older two were out of town with their mom. When I got home from the grocery, I noticed antifreeze leaking (profusely) from my car. I texted my son-in-law to let him know I had another project for him. That man has saved me thousands of dollars in car repairs! As it stands now, it looks like it's the water pump. Oh, goodie! 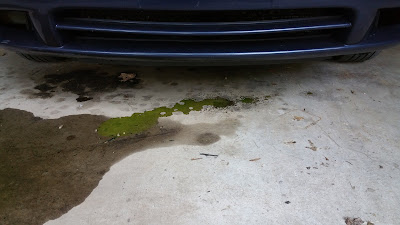 I was disappointed that I didn't get to see all of my grandbabies, but I did get to see both of my daughters, and got to spend one-on-one time with what is most likely the cutest Republican ever .. 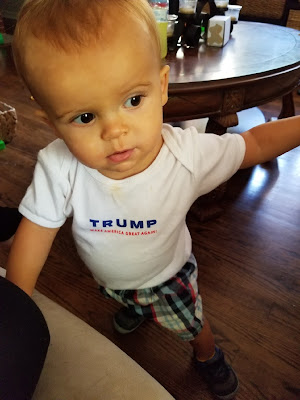 Sunday I got up early to have my coffee and cut the grass. But, before I could cut the grass, I had to get a stupid gum ball dislodged from between the roller and the self-propelled belt on my lawn mower. Try as I might, I could not budge the nuts.

After knocking on all my neighbors doors, I found one home, and he kindly came down to help me. He had the mower taken apart, the gum ball removed, and the parts replaced in mere minutes. I thanked him profusely, then he left to join his adorable little daughter and very pregnant wife for breakfast.

The mower had to be laid on it's side to be worked on, so I knew I had to let it sit for a while. No problem ... I had plenty of things to do. I decided ro sweep up the rocks in the road that wash out every time we get a heavy rain. While I was working on that, another neighbor (the one who lent me his post hole digger to plant the boxwoods came over with his John Deere riding mower to cut my hill. I crossed my hands over my heart and mouthed "Thank you" to him as I moved my shovel and broom out of the way. He nodded his acceptance of my gratitude ... then got his mower lodged between a drainage pipe and the hill. He called yet another neighbor, who had him pulled out in mere minutes. 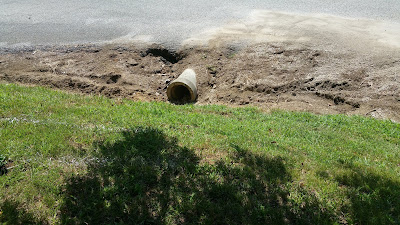 By this time, the mower had sat long enough that it should start ... but for some reason, the pull cord wouldn't pull. I tried adjusting everything I knew to adjust (which is the tension on the self-propelled ... which also has nothing to do with the pull cord) ... so I decided God did not want me cutting the grass this weekend. I put the mower in the garage. I thought about planting the vinca vines, but I can't do that until I have mulch to help hold the soil in place, and I can't find the mulch I like. With yard work off the table, I went inside and took a shower.

After my shower, I grilled chicken for my lunches this week, but I was almost afraid to touch the grill. It went fine, but had the grill exploded, it wouldn't have surprised me in the least.

If you know of a vehicle matching this description, please contact the Sheriff's Office TIP line at 812-421-6297 or leave a web tip here.
Posted by Jackie Coleman - Author at 5:50 AM