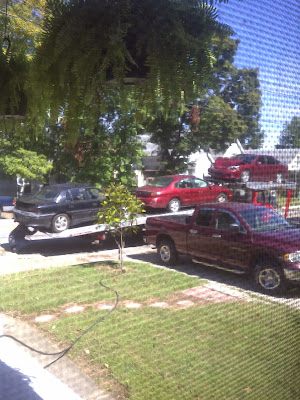 While looking through pictures for a slideshow, I came across the picture of my oldest daughter's car being towed away for good ... and it brought back so many memories. I bought her this car when she turned 16. It was a used car, but she picked it out ... and she loved it! She drove it for four years before she bought a car herself.

She didn't trade her old car in when she bought a new one, and by this time, it had some serious issues. I didn't want to sink that kind of money into the car. But, I had to do something with it. My boyfriend suggested I donate it to a charity. Brilliant!


So, I found an organization that spent it's time and money researching drugs to cure lung cancer, and to looking for ways to detect it before it was too late. And, best of all, they don't throw any money away on commercials that don't serve any purpose other than to irritate smokers and rile up non-smokers.

I took a picture when they came to pick it up. It was a little bittersweet, because I get overly attached to objects ... I even cried when the family on The Wonder Years stood in their yard watching as a wrecker towed off their old, broken-down station wagon!!!

I had a lump in my throat as I stood at the door and watched them load my daughter's car onto their truck. I think they ended up selling it for quite a bit more than I thought it would bring, and it made me feel good to know that money was going to a good cause.