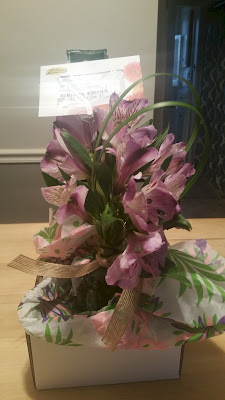 I hadn't been home from work long yesterday when there was a knock at the front door. When I opened the door, a flower delivery man was holding an arrangement. They were addressed to Thing 2. He verified she lived here, then handed me the box containing the delicate purple blooms.

Thing 2 has been having a tough time lately, and it made my heart smile to know that her fiance had sent her flowers to brighten her day. How sweet! I wanted her to see them as soon as she got off work, so I took a picture of the flowers, and the card addressed to her, and texted it to her.

She called as soon as she got off work and asked me, "Did you read the card?"

"Of course not," I replied. "I don't open things and read stuff addressed to you!"

As I walked back to the kitchen to read the card to her, I told her I knew they were from her boyfriend, and how sweet I thought it was that he sent them to her.


They were for ME! Thing 2 sent flowers to ME!!! I got a little choked up at how sweet that was ... and the sentimental note didn't help! After I read the card and realized they were for me, I was thrilled ... then I felt bad that they weren't for her! She's the ones who needs flowers right now. I'm the one who should have sent her flowers!!! 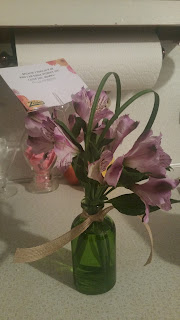 When the kids were growing up, I was well aware of the fate of so many children raised in a "broken" home. I was terrified my kids would grow up and be "statistics". I did my best to give them a good childhood, and tried to make sure they had the things they would have had if they were raised with two parents. Being a loving mother came easy to me. Being a stern father, however, did not. But, I know love without discipline is empty, so I had to punish them when they broke the rules. I had to hold them accountable for their actions ... even when doing so broke my heart.

One time, I apologized to her for not giving her a better childhood. She looked at me ... genuinely confused ... and said, "What do you mean? I had a wonderful childhood!"

I guess I hid the exhaustion of all those sleepless nights, the sacrifices, the loneliness, the tears, and the fear of raising three kids alone better than I remembered! Good.

It's a true mark of maturity when you finally recognize and acknowledge all your parents(s) did for you. When she was four years old, Thing 2 promised me she would stay four forever. I guess she lied to me ... because I do believe my little girl is all grown up.
Posted by Jackie Coleman - Author at 8:14 AM