It Was Love At First Sight 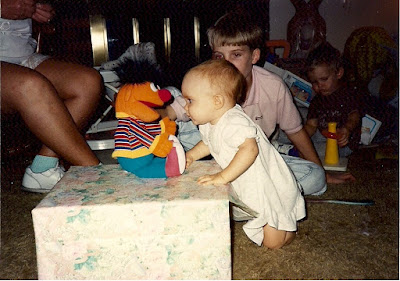 For Thing 1's first birthday, I bought her an Ernie doll. Her dad thought Ernie was lame, so he bought her a Go-Go My Walking Pup. When she saw Ernie, she immediately fell in love. Seriously. Little heart were floating out of her! Ernie instantly became her constant companion for many years. (FYI ... she was terrified of Go-Go My Walking Pup!) When Ernie got a hole in his "shoe" from being dragged around everywhere, the resident cobbler (me!) was hired to repair it. Thing 1 sat beside me and held Ernie's hand for moral support as he underwent the delicate operation. 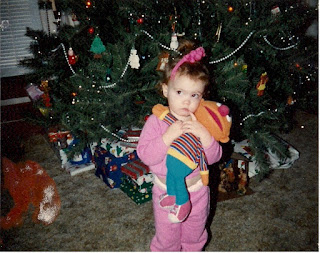 Thing 1 wouldn't take a nap or go to bed without Ernie. When he needed a "bath", I'd have to wait for her to fall asleep, sneak into her room and pry him out of her embrace, then wash, dry, and return him to her arms before I went to bed. He always came out of the dryer good as new ... except one time. I took him out of the dryer, and his trademark straight, standing-on-end hair had became a tight afro. I panicked. Her beloved Ernie looked a little ... how do I say this ... odd! I was afraid she'd reject him as an impostor, but my worries were for naught. When she first saw him in the morning, she looked at him like "What the heck did you to to your hair last night?", then she hugged him. Turns out, she didn't care what Ernie did with his hair. "Afro Ernie" was still Ernie. His looks didn't matter ... she loved him for who he was on the inside. 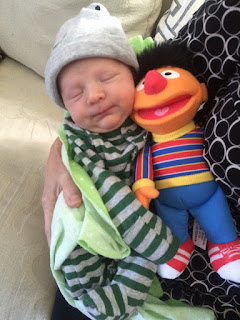 I bought an Ernie for Thing 2 for her first birthday, but he never won her heart. She was far too busy preparing and serving plastic food, brewing pots of invisible coffee, and pushing baby dolls around in a little pink buggy. Thing 3 was never on Team Ernie, either ... he was into stuffed puppies, blocks, trucks, and anything that made noise.

Just before my little grandson was born, Thing 2 and I ran to Target for something ... and I saw a baby Ernie!!!!  I had to get him. When little W came to visit one time, I took his picture with Ernie. (I told him to smile like Ernie ... close enough!)

All that to say, a child loves what they love, and only time will tell whether or not W will love his Ernie as much as Thing 1 loved hers, but I sure hope he does. With W only a month old, I'll have to wait a while before he's old enough to decide which toy he can't live (or sleep) without ... and I'm really rooting for Ernie!
Posted by Jackie Coleman - Author at 11:58 AM