Growing Up ... A Nostalgic Walk Down Memory lane 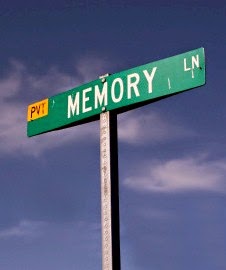 Things were different when I was a child. The world safer back then. There was evil then, too, but it wasn't as rampant as it is today. Boundaries were crystal clear, not ambiguous. Children respected authority. No one expected to be given anything ... if you wanted something, you had to work for it. We didn't get new toys and clothes all the time. We got new clothes for school and summer, or when we needed new ones, not because we simply wanted new ones. We got toys on our birthday and Christmas. We got candy on Easter and Halloween. Cakes and cupcakes were a treat, rarely seen outside of birthdays. Homemade cookies, however, were almost always in a jar on the kitchen counter, and my mother must have bought apples by the truckload.

When I was a child, my parents had no idea where I was all day. They had set the limits as to where we were allowed to roam, and we stayed within those boundaries. Us kids would leave right after breakfast and be gone until we were hungry for lunch. After lunch, we'd be off playing until we were called home for dinner. After dinner, we'd take off again, coming home only when we were called home for bedtime. When my kids were little, I'd have a panic attack if I couldn't find them. It's not that I was an overbearing, helicopter parent ... kids simply aren't as safe these days.

My childhood days were spent doing cartwheels, back bends, round-off's, and Arabian flips. We'd spend hours drawing houses in chalk, then having chalk-stained back sides from sitting on chalk couches and "sleeping" in our chalk beds. We'd pull a picnic table under a tree, then use clothespins to drape a sheet to the branches to make our covered wagon. We'd line up our bikes in front, tether our "horses" together with a rope, then drive our wagon train out west ... and spend the entire day traversing the perils of the untamed frontier on the Oregon trail.

Sometimes we'd clip a playing card to the frame of our bikes with a clothespin and turn them into motorcycles. We'd take long, lazy, meandering bike rides. Our baskets were often filled with a sack lunch and a baby doll. If we were lucky enough, our moms would let us take a coke with us (and by "coke", I mean Ski or Double Cola) ... and we'd bring a bottle opener, because canned cokes had yet to be invented. We'd ride our bikes to the Tot Lot, eat at the picnic table or on the grass, then spend the afternoon making clover necklaces, rings, bracelets ... and for the more creative ... earrings. When we ran out of places to adorn with jewelry, we'd just string clovers together in one long row. Sometimes we'd connect all our our clover garlands together and marvel at how long they were.

After that, we'd climb on the metal monkey bars or go down the slicky-slide ... scorching our hands and butts. Sometimes we'd get "creative" and go down backwards or on our bellies and fly off the end into the dirt, which had been ground into powder from years of pounding. We'd push each other on the merry-go-round until we were too dizzy to walk straight. We'd swing as high as we could, then jump out. We'd sit opposite of each other on the see-saw and lazily push each other up and down ... or push off the ground as hard as we could and try to fling the other one off.

On hot, humid days, my mom would let us get the sprinkler out. The whole neighborhood would be in our front yard, running through the water, screeching and giggling with delight. We'd drink gallons and gallons of Kool-Aid from the never-ending supply in the fridge. We'd fill a cup with Kool-Aid, put a spoon in it and stick it in the freezer and make our own popsicles. We invented culinary delicacies like bologna and potato chip sandwiches, impressed by how clever we were. We'd drink the nectar of honeysuckle and eat wild onions without ever stopping to consider that a dog had probably pee'd on them.

In the evening, my dad would walk into the front yard and whistle ... the same whistle every time ... and everyone knew that meant my sisters and I had to go home. His whistle could probably be heard into the next county. My dad had a stroke when I was around twelve. After that, he couldn't whistle anymore. Until then, when we heard the whistle, we'd obediently go home for dinner, leaving our bikes laying on the ground in the front yard ... and they were always there in the morning.

Back then, kids rarely went inside another kids house. We played outside all day. I'm sure it rained when I was a child, but I don't have any memories of being stuck inside waiting for a storm to pass. I remember waking up, eating a bowl of cereal, then heading outside to start the day. By supper time, our long hair would be tangled and our skin would be coated in dust ... but with a little soap and water, we'd be good as new.

A lot of wonderful advances have been made in medicine and technology since I was a child. These things make our lives easier and allow us to live longer, but some of these conveniences have come at a price. When I was a child, I imagine it was hard for pedophiles to get their hands on child pornography. The internet now makes it easy for them to download all the trash they can choke on, until watching someone else rape a child doesn't do it for them anymore. Social media has taken bullying and stalking to a whole new level, allowing terrorists to recruit anonymously from afar. About the only good thing to come out of the last generation were the civil rights for blacks.

It wasn't that long ago that infidelity in marriage by a politician or celebrity killed their careers. Having a child out of wedlock was something to be ashamed of. Now, affairs are shrugged off and illegitimate children are more common than those born within marriage. Society is decaying ... and no one seems to care. How can we teach our daughter's to dress modestly when celebrities are handsomely rewarded for and have built extremely lucrative careers on sex tapes and naked selfies? How can we teach our son's to respect women when celebrities and sports role models beat their wives and girlfriends and walk away with a lucrative contract and a slap on the wrist?

I wish my kids could have grown up in the freedom I knew as a child. I wish my grandchildren would know that freedom, too. But they won't. America has changed ... and not all the changes are for the better.
Posted by Jackie Coleman - Author at 11:10 AM