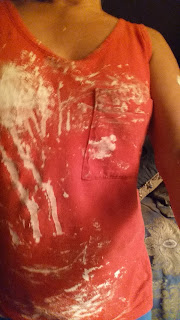 This was me a year ago, right after we finished painting my old house. (You can read about it and see the photographs here).

Now that, ladies and gentleman ... was a chore!

I was really sick of painting after that. Actually, I was sick of painting before we began tackling the outside! It had only been a year or so since I had painted the entire inside, ceilings and walls! Being a Victorian, it has high ceilings, and every room has lots of windows and doors. Painting the walls meant I was constantly up and down on a ladder, and painting the ceilings gave me a crick in my neck! But, it needed to be done, as it had been almost ten years since I had painted any of the interior.

When I moved to my new house, I knew I had a little painting to do, and the thought made me want to cry! I didn't have to do that much painting, but even if I'd had to paint the entire house, inside and out, and the woods surrounding it, it still don't think it would have been as much work painting just the outside of my old one!

Butt, the effort was worth it. The house looked immensely better. It had needed painting for years, but I couldn't decide on a color scheme, so I kept putting it off. Well, that and the price. I never inquired as to how much someone would charge to paint it for me, but because of the sheer size of the project, I figured it would cost an arm and a leg to hire someone to paint that behemoth! It never occurred to me that I (we) would be able to do it ourselves.

A year on, I'm well-settled into my new home. I still wake up everyday and think "I love this house!"
Posted by Jackie Coleman - Author at 8:08 AM