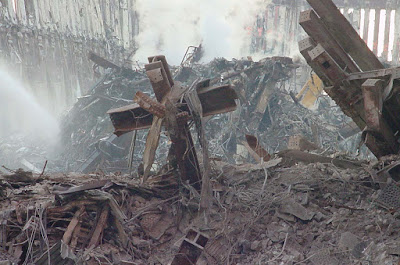 Just saying that date evokes memories in everyone alive that day. The year isn't necessary. If you say, "September 11", everyone knows you're talking about 2001. I remember everyone saying, "Never forget". I couldn't fathom anyone ever forgetting.

And then I thought about the holocaust, how history books don't mention it and how some people are denying it happened, regardless of the mountains of physical and photographic evidence, not to mention the eye witnesses ... from victims, perpetrators, towns people, and liberators.

It won't be too many years before old age will claim the last living witnesses of the atrocities perpetrated by the Nazi's. And one day, there won't be any living witnesses to September 11th. My kids were too young to understand the gravity of that day, but as they grew up, they did. I talk about the holocaust and September 11th to my children. My prayer is that one day they'll pass on their knowledge to their children, and so on, and so forth.

I can't say no one will forget, but I'm doing my small part to make sure my children never do ... and I'm certain they never will.
Posted by Jackie Coleman - Author at 7:07 AM