A lot of businesses purposely try to evoke shock and outrage with their advertising to get people talking about their business/product/service, etc. Sadly, it often works, but I'm not so sure Hacienda is seeing much benefit to their latest campaign.

I love Mexican food, but I don't care much for Hacienda, and there is no billboard they can erect that would make me frequent their restaurants any more often than I currently do (which is rare).

Take their most recent billboard (below). For some reason, Hacienda executives thought this was a good idea. So it's okay to say something like this to sell food, but wildly racist if said by a white person? I've read that Mexican's are offended by this billboard. Newsflash ... white people are offended by it, too ... even those who are scratching their heads thas to why a wall wasn't built decades ago. 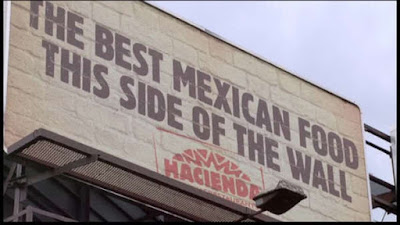 A previous advertising campaign was in extremely poor taste (below). This campaign referenced a horrific tragedy, the Jonestown Massacre, where over 900 people died. What's next? A billboard making fun of those who died on 9/11? 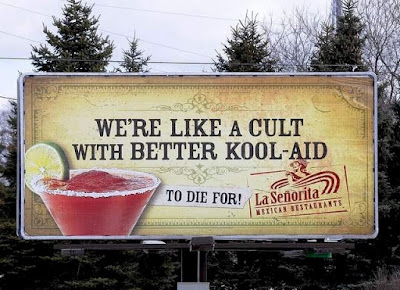 And their attempt at humor is questionable, at best. I fail to see how a reference to diarrhea will drive diners to your restaurant (below). 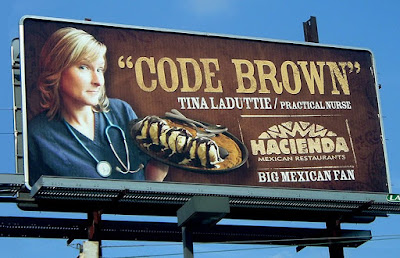 Billboards are an effective form of advertising, but only if they make you want to enjoy the services and products advertised ... and these, my friend, most assuredly do not.
Posted by Jackie Coleman - Author at 5:30 AM