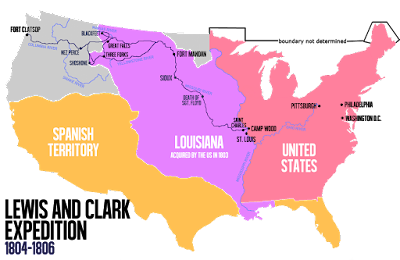 On May 1804,  the Corps of Discovery, lead by Meriwether Lewis and William Clark set out on an expedition to map the western portion modern-day America, and to find a practical route across the continent. They returned on this day in 1806.

Everyone knows the story of the Lewis and Clark Expedition, but what fascinates me is that just over 200 years ago, the western half of our country was unknown and unexplored. Life was completely different. Fields were plowed by with oxen, laundry was scrubbed in a tub, and people traveled by horse and buggy. Oil-burning lanterns and candles were their only means of light in the darkness. Except for the wealthy, people ate what they grew on their own land and sewed their clothes by hand. Homes were heated and meals were cooked in fireplaces and wood-burning stoves. And, of course, they had to chop the wood themselves.

The things we take for granted ... refrigerators, phones, electricity, indoor plumbing, central heat and air, cars, computers, airplanes, photographs, and even toilet paper ... were unimaginable to those living back then. The moon was nothing more than a big, white ball in the sky, that waxed and waned each month. They would have laughed themselves silly if anyone had ever suggested that man would one day walk on its surface.

It's unbelievable that life has changed so much in such a short amount of time. I can't even begin to imagine what life will be like 200 years from now.
Posted by Jackie Coleman - Author at 12:59 PM