Poland Falls and the World Goes to War 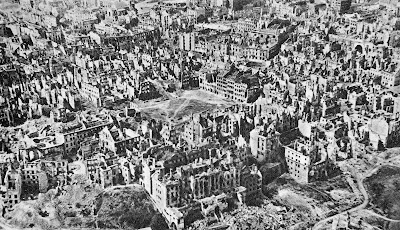 On this day in 1939, after 26 days of brave resistance, Poland fell to Nazi Germany, and Warsaw was left in ruins.

A friend of mine visited Poland a few years back. With the help of a Polish driver and translator, he toured the country and heard stories of World War II through the eyes of a Polish citizen. Prior to the invasion, Poland had made a pact with the Soviets to help them should Germany decide to invade. The Polish driver told my friend that as Warsaw was bombed into dust, they could see the Soviets on the other side of the Wisla River, and how disheartened everyone was that Russia did not come to their aid as promised. What the Poles didn't know was that Russia and Germany had entered into a pact ... they would both invade Poland and split the country between them.

By the wars end, Poland had been decimated. Millions of Poles were imprisoned and/or murdered at the hands of the Nazi's and the Soviets ... for no other crime than simply being born in a land these merciless dictators desired.

The driver took my friend to "Old Town" in Warsaw, filled with ornate buildings that looked to be hundreds of years old. This man told him that Old Town was flattened by bombs during the war, but that the Polish people began rebuilding it once their invaders were driven from their land after Germany surrendered. Old Town was rebuilt to look much the same way it had before it had been nearly wiped off the map.

Aside from the Jews, no one suffered more than Poland at the hand's of Germans, with Polish Jews singled out for the most inhumane treatment. The atrocities perpetrated again the Poles is unimaginable to most of us. As difficult as it is to read the first-hand accounts of survivors and liberators, there is no way for us to imagine the hell these people endured.

But they did endure ... and one by one, they rebuilt their beautiful cities to their former splendor.

Of all the places my friend has visited, Poland is one of his favorites. For Christmas one year, I commissioned some drawings of places that are special to him, and Old Town in Warsaw was my first choice.

I find the courage and perseverance of the Polish people inspiring, and I am in awe of their pride and determination.