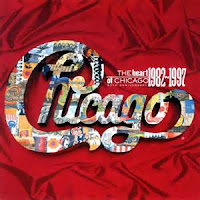 Thirty-nine years ago today, the rock group Chicago had their first number one song, "If You Leave Me Now". Superman is a huge fan of Chicago. While I love a lot of their lyrics (except for 25 Or 6 To 4 ... what the heck is that about?!!), I've never really cared for the heavy in brass instruments prominent in so much of their music.

In high school, in the grade above me, there was a guy who played trumpet in the marching band. He was arrogant, hateful, and downright cruel ... on a good day. I couldn't stand the way he laughed at and put people down. He sickened me. But, he was a good trumpet player, and as a result (much to my chagrin), he got a lot of solo's. After he was done with a solo, his entire demeanor would change, as though he played so hard he barely had the strength to stand unaided. It might have been believable had he not immediately recovered as soon as he made his way back to his squad, disappearing in the throng of identically clad musicians. Watching him play disgusted me. He was such a jerk! I not only hated hearing a trumpet ... I hated all brass instruments!

To this day, thinking about him puts a scowl on my face ... and hearing a trumpet makes me think of him ... which causes me to make a face like I'm sniffing something that's been in the refrigerator too long. I'd rather hear fingernails on a chalkboard than a trumpet. One of my kids wanted to play the trumpet when selecting what instrument to play in grade school. I absolutely put my foot down. No trumpet, I told them, would ever, ever, EVER enter my home.

My distaste for brass instruments colored my opinion of Chicago, which is a shame, because they had amazing harmony and some very good lyrics (minus, of course, "25 Or 6 To 4"). I've always loved their songs, but I hated their brass-heavy sound. I now enjoy listening to them much more than I did years ago ... but I still cringe when I hear their big brass section dominating the music ... and I still fight the urge to turn the station.
Posted by Jackie Coleman - Author at 7:39 AM