The Sense of Smell 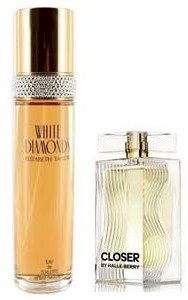 For many years, I wore White Diamonds perfume. When the kids were really young, I would squirt a little on their wrists before school or daycare, and tell them that if they ever missed me, to smell their wrists then wrap their arms around themselves and squeeze ... and that was Mama giving them a hug. Silly, I know, but it gave them a great bit of comfort to have "me" when they needed me.

Superman has always bought me perfume at Christmas and sometimes throughout the year, and it's usually a different one each time. Some of them I loved and some I wasn't sure of. But I can only smell perfume for a minute or two after I put it on, so I never it's never mattered to me if I love it or not. He's the one who has to smell me, so I happily wear whatever he buys.

Last year he bought me Closer by Halle Berry. When I saw the bottle, I read it as "clozer" and told him that was a particularly odd name for perfume! He pointed out the correct pronunciation (doh!), and I agreed that made much more sense.

Closer was the perfume of the day when Thing 3 had his wreck last December. While he was in a coma and on the ventilator, I only left the hospital once or twice, and just long enough to race home, shower, and grab clothes. At that time, my voice stimulated him when they lessened the sedation to see if they could get some kind of intelligible response from him. Sometimes my voice stimulated him to the point that he thrashed around and had to be sedated again. Although that was frightening, the doctors and nurses took that as a good sign. Their voices got no response, but mine did. As scary as that was, it was heartening to know he was trying to "get to me".

On one of my quick trips home, I grabbed my White Diamonds perfume. That's the smell my kids associate with "Mama". The sense of smell can trigger more powerful memories and emotions than any of the other senses. I figured smelling like "Mama" might help him "come back". If nothing else, he would know I was there. I would get close to him and the sing the songs I sang to him as a child. I think it helped. Whether it did or not, I don't know ... but I think it mattered and made a difference.

Once he was off the ventilator and breathing, he wasn't actually conscious for a while. It took a day or two before he would open up his eyes for more than a moment, and his eyes gave away little that he comprehended anything that was going on around him. But when I sat beside the bed and massaged his scalp or held his hand, he would wiggle towards that side of the bed and cuddle up to me. He didn't do that with anyone else. Some people poo-poohed my hypothesis, but I'm convinced he knew I was there and wanted to be close to me.

I ran out of Closer a couple of months ago so I dug out my old bottle of White Diamonds. Now I'm out of White Diamonds, too. Christmas is just around the corner, which means Superman will probably pick me out another scent, but I feel naked without perfume, so I'm going to stop and purchase some after work. I'll probably buy Closer, because I know Superman likes it ... but I'll probably buy some White Diamonds as well ... not because I ever want to have to wear it again to trigger a response from comatose child ... but because it makes the kids smile when they smell it. It reminds them of Mama and makes them feel safe and loved ... and as long as I'm alive ... they are.