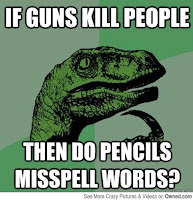 I normally try to steer away from controversial subjects on this blog, but I feel compelled to put my two cents in about gun control. The Second Amendment of the Constitution of the United States of America reads as follows:


A well regulated Militia, being necessary to the security of a free State, the right of the people to keep and bear arms, shall not be infringed.

The point of the above is that the founding father's intended the Second Amendment not only allow people to own guns to feed their family and protect them from harm, but also to protect themselves from their own government.

The Nazi's embraced this philosphy, too, from the other side of the coin. 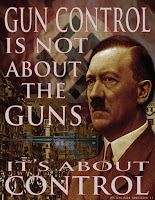 Prior to 1933, German citizens were required to register their firearms with the government. In 1933, the Nazi's used this list to confiscate guns from law abiding citizens. In 1938, firearms ownership was restricted to Nazi party members and other "reliable" people. The new Weapons Law specifically barred Jews from owning any weapons, even clubs or knives. This law also made it impossible for German citizens, Jews in particular, to protect themselves from the Nazi's killing machine. 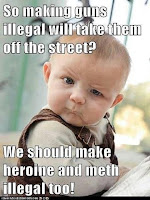 In the wake of recent mass shootings here in the United States, renewed calls for gun control dominate the news and speeches of politicians pandering for votes. Gun control laws won't prevent criminals from owning guns ... because criminals don't obey laws! Gun control laws simply prevent the law-abiding citizens from protecting themselves.
Suzanna Gratia Hupp was among those in Luby's Cafeteria in Kileen, Texas on October 16, 1991, when madman drove his truck through a window and opened fire on those enjoying lunch with their families. Twenty-three people were killed, and twenty more were injured. Suzanna Hupp had left her revolver in her car, because it was a criminal offense to carry a concealed weapon (at the time) into that restaurant. She was helpless, and as a result, she lost both of her parents in the attack. She doesn't blame the gunman ... or guns ... she blames the politicians that made it a crime for her to protect herself. Had she been able to keep her gun on her person, most of those who perished that day would still be alive. She obeyed the law ... and paid a horrific price for her obedience.

Her testimony before Congress is quite powerful.

Everything she said made sense, but she made several points I think need repeating: 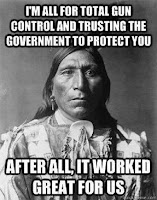 "How a politician stands on the Second Amendment tells you how he or she views you as an individual... as a trustworthy and productive citizen, or as part of an unruly crowd that needs to be lorded over, controlled, supervised, and taken care of." Suzanna Gratia Hupp

"Let me make a point here, in case this isn't becoming extremely clear. My state has gun control laws. It did not keep Hennard from coming in and killing everybody! What it did do, was keep me from protecting my family! That's the only thing that cotton pickin' law did! OK! Understand that! That's ...that's so important!" Suzanna Gratia Hupp 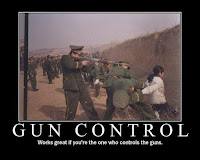 "The Second Amendment is not about duck hunting, and I know I'm not going to make very many friends saying this, but it's about our right, all of our right to be able to protect ourselves from all of you guys [politicians] up there." Suzanna Gratia Hupp 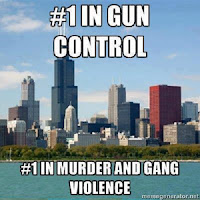 Chicago has some of the strictest gun control laws in the country ... and one of the highest murder rates. New York City has instituted new laws, tying the police's hands, and their murder and violent crime rate is beginning to skyrocket after decades of decline. 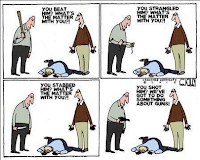 Gun control laws do not keep guns out of the hands of criminals, it keeps them out of the hands of law abiding citizens. Why do you think so many schools are the targets of mass shootings? It's because the killer knows that no one there is armed ... and no one there can prevent him from carrying out his murderous rampage. Gun free zones are an open invitation to those hell bent on killing as many people as they can. Opening fire at a school to kill innocent children and teachers is like shooting fish in a barrel. The gunmen know this, and that's why they choose these targets.

I can't even begin to imagine the pain of families who have lost loved ones through this kind of violence, but if they think that making it harder, or impossible, for American's to obtain a gun is the answer, they are sadly mistaken.
Posted by Jackie Coleman - Author at 11:40 AM