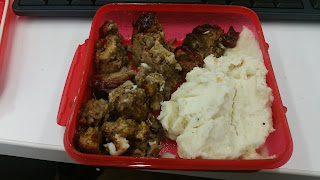 After months of begging from my kids, I finally made meatloaf for dinner last weekend. When they were little I made meatloaf a few times, and they'd turn their nose up at it. They would literally cry if I made a roast! I guess their palettes were too sophisticated for something as domestic as meatloaf or roast. They would eat chili and a few other dishes, but they would have been just as happy if I served pizza or hot dogs and macaroni and cheese every night. For years, Hamburger helper was as close as I could get to getting them to eat "real" food.

Now they beg me for the very foods that once caused tears and gnashing of teeth. I have to make double batches to have enough for both dinner and leftovers. Ten years ago I threw away a lot of really good food because the kids would just pick at it, and they would rather go hungry than eat leftovers. Fast forward to 2015 ... and they now pray for ... and fight over ... leftovers!

I've always tried to get the kids to help me fix dinner. I could use the help, I wanted to spend time with them, and they need to know how to cook. Sometimes they'd say they'd help, but they were bored before the hamburger had a chance to brown, and I'd find myself alone in the kitchen. Now that Thing 2 is engaged, she's finally willing to let me teach her how to cook. And I no longer have to offer ... she asks me to show her.

Thing 3 has always been interested in learning how to cook (a few things) ... mainly because he's interested in eating! When he was only ten years old, the girls would ask him to make them pancakes because he knew how and they didn't. He's not afraid to just throw things into a pot and hope for the best ... and usually, his "inventions" are quite tasty. I think that's the mark of a good cook ... knowing what foods you can put together to produce a palatable dish.

Sewing is another skill I have tried to pass on to my kids. None of them were even vaguely interested until a few years ago when Thing 1 finally wanted to learn ... only to discover she loves to sew. I keep telling Thing 2 she'll want to learn someday, but she poo-pooh's me. But Thing 1 and I know she'll come around. Once she's married and making her house a home, there will undoubtedly be a project or two on Pinterest that will catch her eye that involves a needle and thread ... and then she'll realize learning to sew isn't like learning to mop. It's fun ... and provides near-instant gratification!

Thing 2 adamantly denies that she will ever want to learn to sew, but Thing 1 and I know differently. And so we wait ... ready to smile and say "I told you so" at a moment's notice.
Posted by Jackie Coleman - Author at 9:59 AM