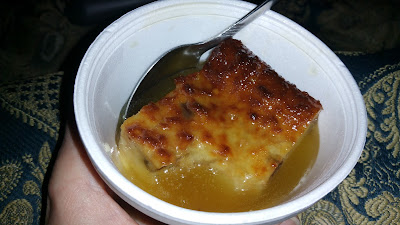 Before the kids went to the Fall Festival last nigh, they asked me if I wanted shrimp creole (which is what I  get every time I go down there). But, I had made chili when I got home and had already eaten, so I told them to bring me bread pudding with whiskey sauce instead, and what booth to buy it at. (I also had bread pudding at lunch, but that's beside the point!) It was still warm when the kids handed it to me. YUM! It was sooooo good!

I went to the Fall Festival at lunch with some co-workers yesterday. The five of us came from four different locations, so we told everyone where to meet. While we were waiting, I looked over and saw a booth selling cobbler. Superman loves peach cobbler, so I bought some for him. I was going to drop it by his office on the way back to work, but he was too busy, so I told him I'd take it home and he could pick it up later.

As the afternoon wore on, my mind kept wandering to the peach cobbler downstairs in the refrigerator. I gave serious consideration to eating some (or all!) of it, but I didn't. I'd already told him I had bought it for him and knew he was drooling for it. Peach cobbler is to Superman as diamonds are to women. Eating his cobbler would be downright cruel ... akin to telling kids your're taking them to Disneyland and then not going. When he stopped by for dinner last night I told him if I didn't love him so much, he wouldn't be having peach cobbler for dessert!

Posted by Jackie Coleman - Author at 4:39 AM