1.5 Million Dollars to Study How Infants Think About Food 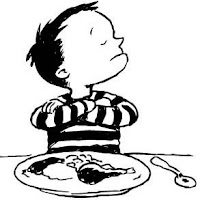 As of September of 2015, The National Institutes of Health had spent nearly 1.5 million dollars on a study entitled "Infant's and Children's Reasoning About Foods." Shockingly, after spending that much money, they had only determined that young children would rather not eat food that someone has licked or sneezed on.

The researchers characterize infants as having "limited knowledge in the food domain". Children aged three to six years old are "more knowledgeable than infants and toddlers about foods" but are "notoriously picky eaters".

They spent 1.5 million dollars to discover what every mother or anyone who has ever been around an infant or young child already knows! Babies have no knowledge of food. Toddler don't know much about food, and preschoolers are picky eaters.

Infants have no reasoning about food! Infants don't think in terms of "A bottle of formula sounds really good about now", or "I wonder if they have any of those strained peas left".  Infants cry when they have an unmet need. When their belly is empty, they're uncomfortable, so they cry. When they have gas, they're uncomfortable, so they cry. If they don't feel good or if they're tired, they cry. It's up to the mother or caretaker has to figure out why they're crying.

What they should have used that money for was to study mother's, and why they cater to picky eaters. Growing up, if I had thought for one second that my mother would give me cookies if I didn't eat anything else, I can guarantee you I would have grown up eating only cookies. But, my mother fixed a big dinner every single night. She made a lot of sides. If you couldn't find anything you liked on the table, well, better luck next time! She didn't care if we ate or not! She knew that we would get hungry and eat whatever she fixed. Had she catered to all of us like she did my youngest sibling ... who only ate spaghetti and butter bread ... we would have all been picky eaters. As it was, we ate what was prepared or we went hungry ... except for my youngest sister. She only ate spaghetti and butter bread so the rest of us were forced to eat spaghetti and butter bread ... four or five times a week!

I remember asking my mom why we had spaghetti so often. She said it was the only thing Sister X would eat. The rest of us were so sick of spaghetti we couldn't force down another forkful, so we went hungry! There were eight of us kids, plus my parents. My mom was a really good cook and she prepared a variety of foods every night ... until Sister X decided she only liked spaghetti and butter bread ... and that became our staple. It's a wonder I can eat spaghetti now!

I was married to a picky eater, and it wasn't long before I discovered that if an adult is a picky eater, they are picky about other things, too ... and it's usually you ... because they don't do anything wrong! After eating nothing but spaghetti for years then marrying a picky eater, I have zero tolerance for picky eaters, and I made sure my kids weren't picky. I tried to fix 'kid friendly' dinners, but if they didn't like what I served, well, better luck next time!

Food was never used as a reward or punishment, when I was growing up or when I was raising kids of my own. My mother, and then me, treated food as nourishment. Eat what you want, as much as you want, but don't expect anyone to fix you anything else ... except for Sister X ... she always got spaghetti and butter bread.
Posted by Jackie Coleman - Author at 12:51 PM