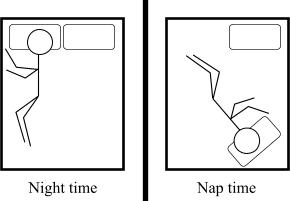 Unlike a lot of things that have hard and fast rules, like whether the toilet paper is hung over the top or from the bottom ... (the correct way is over the top) ... napping has no set of rules. Really! When it comes to napping, anything goes.

Take the napping location. Napping is acceptable in bed, on the sofa, or in a recliner. You can nap inside or outside. Napping rules are so versatile that you can nap on the sofa one day and in bed the next! For those who choose to nap in bed, there is an additional consideration ... on top of or underneath the covers.

Me? Well, I'm firmly in the nap-in-bed-on-top-of-the-covers camp. Getting under the covers is too much of a commitment ... that's only for "real" sleeping or when I'm sick. Besides, I can't stand an unmade bed. If I napped under the covers, I'd just have to make the bed again, which makes napping under the covers less pleasurable.

My nap time does comer with an exciting twist ... I nap with my head at the foot of the bed and my body at an angle. There was no real thought process that went into this, it's just something I've always done. If I had to guess as to why, I'd say it's so that I don't disturb the pillows on the other side of the bed.

When my little grandson is over, I'll lay down with him when he naps. He sleeps better, and longer, when I lay down with him. I don't sleep ... I just close my eyes and lay beside him. He's almost ten months, so when he's awake, he's a busy boy ... but when he's tired or sleeping, he's a cuddler.

I never feel guilty for napping or laying down with the baby. I don't lay there thinking of what I should be doing instead of napping like a lazy slug ... I fall asleep thinking about what a decadent, luxurious thing a nap is. Since they don't do themselves, any chore I'm putting off will still be there when I awake ... and I refuse to give up those sleepy cuddles from my grandson. Before I know it, he'll be too big for naps and there won't be any lazy afternoons when he's content to fall asleep in Grandma's arms. And even though I don't sleep ... those are the best naps.
Posted by Jackie Coleman - Author at 5:55 AM