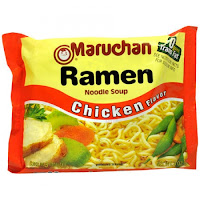 A man in Pennsylvania beat his friend for refusing to eat the Ramen noodles he had cooked for him, punching him 10-15 times in the right eye. Court records show the victim had bruises, swelling, and a 1" cut under his eye.

Okay, let me get this straight ... the victim was punched 10-15 times in his right eye. If the victim had been trying to get away, he would have been punched numerous places ... so that means the victim sat there, motionless, while his friend continued to hit him ... in his right eye.

I'm going out on a limb here and guess drugs or alcohol ... or likely both ... had something to do with this altercation!
Posted by Jackie Coleman - Author at 9:59 AM