The Saga of Cell Phones 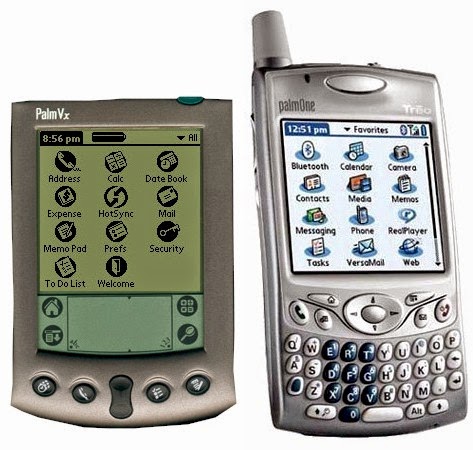 Remember the Palm Pilot? I do. I got my first Palm Pilot in 2003 ... and I loved it. These came out when my kids were young and I was a network administrator for a large law firm. Everything went in it. Everything. I had to keep track of a lot of people and this nifty little device let me ditch the paper calendar.

I was so happy.

When Palm came out with the Treo ... a cell phone with all the power of Palm calendaring, I thought I'd died and gone to heaven! Being on the same platform, I was able to sync all my Palm Pilot data right into my Treo! At that time, I didn't even care that it weighed more than a Buick.

There came a time, however, that I did care. It weighed so much I had to wear a belt to keep my pants up. Despite my love for my Treo, I desired a thinner, lighter model. And, since I'd had this phone for so long, I was long overdue for an upgrade.

Wanting to stay on the same platform so that I could seamlessly move my data over, I waited a long time for my carrier to get the Palm Pre, but the calendar turned out to be a joke. You'd never know the Pre was made by a company that built their name on superior calendar functionality. I tried everything to make it work for me, including purchasing some expensive software to try to transfer my data ... which resulted in duplicate entries on my calendar ... something I didn't realize until later. I had that horrid phone less than a week before I took it back and got a Blackberry Torch. It took me several months to clean up my calendar, but I did it. I got rid of all the duplicate entries (I thought).

And, oh, how I loved my Blackberry!!

After many faithful years, my Blackberry began to fall apart. Once again, I waited a really, really, really long time for my carrier to get the new Blackberry Z10. I kept it only a few days ... just long enough (once again) to purchase several different apps and programs designed to export my old Blackberry data into the new one. I took it back and got a Samsung Galaxy S4. The native note app was worthless, but the calendar worked flawlessly ... as long as I synced with a Google calendar. I didn't want to, but I was forced to, and I reluctantly accepted my fate. I found a note app that I could back up to an external source, and once again ... life was good. It took me several months to clean up my calendar (which imported all those duplicate entries I thought I had gotten rid of), but I did it. I got rid of all the duplicate entries ... again ... I thought.

Without boring you with all the gory details, I soon discovered my phone now only stored one year's worth of calendar data. Samsung tech support agreed the phone wasn't working as designed, but they had no idea why, and suggested a factory reset. I didn't want to, but a couple of weeks later, I decided that was my only choice, only to discover ... to my absolute horror ... that the calendar bug was still there ... along with not only duplicate calendar entries, and in some cases, triplicate!

I was still in the process of cleaning up my calendar when I dropped my phone. It landed flat on its back, face up, and began having a seizure. I have had a cell phone since the 90's and have never lost or damaged one ... ever ... but I did that one. I stared at that stupid phone that had caused me so much angst over the last few months ... and I didn't even attempt CPR. The screen was worthless, but the data was still there. I plugged it up to my computer and copied all my data over ... then went and got another phone ... and set everything up ... FOR THE SECOND TIME IN LESS THAN A WEEK.

My new phone works well. I have installed all the apps I bought to replace the native apps that really aren't worth the time it took to write them ... and all is well with the world again. Except ... I can't turn off the weather app and facebook keeps installing itself. I have NEVER, nor will I EVER, get on facebook on my phone, and I DON'T WANT A WEATHER APP! I would love to root my phone and get rid of all pre-loaded apps that I DON'T WANT, WILL NEVER USE, AND THAT KEEP RE-ENABLING THEMSELVES! It's not possible to root my phone right now ... but a lot of smart geeks are working on cracking the code every day ... and I hold out hope that they'll figure out a way ... and then I'll have to set up my phone from scratch ... AGAIN! (Sob!)

I know what you're thinking and the answer is, yes ... I do realize that my obsession to have a phone that works exactly like I want it to borders on the psychotic. The people around me just look the other way when I'm messing with my phone (with smoke coming out of my ears!) and try not to ask any questions ... for fear I'll answer them!