I was out running an errand when the storm hit yesterday. The winds were ferocious, rocking my car back and forth. Small pieces of debris were flying by from both directions. I feared I was driving into a tornado. As bad as the wind was, the rain was even worse. It was one of those torrential downpours where you can't see the road in front of you. Traffic came to a crawl. I got home safely, and I was lucky that I had no damage to my car or house. Other's weren't so lucky. Trees fell on houses and vehicles all over the city ... and took down a lot of power lines. I didn't lose power, but a lot of people did.

My neighbor lost some large branches on one of his trees, but they didn't hit anything. 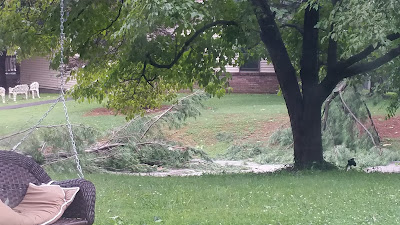 One of my friends sent me a picture of a very large, mature tree that fell at one of the local schools. What a shame. 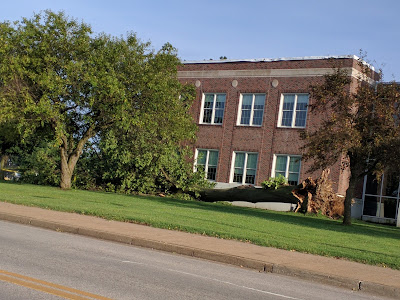 A few hours after the storm, I headed to a friend's house, taking my default route. There were a couple places where trees were lying in the road, but it was still passable ... 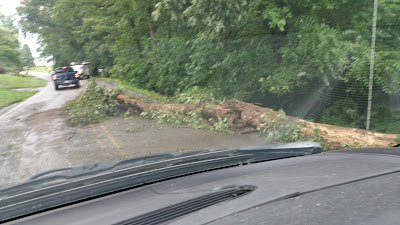 Until I came to a tree blocking the road ... 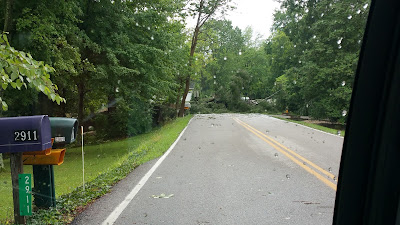 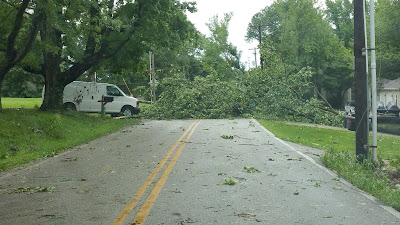 Okay, Plan C. Nope. (Trees down on wire, road closed, but no picture of that one.) 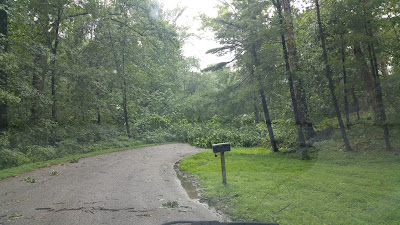 Fortunately, Plan E worked ... because there was no other way to get where I was going! I was expecting the power to be out when I arrived, but it wasn't, and we were able to have a pleasant meal.

A few hours later I had to make an emergency run to Walmart. I took a long, roundabout way there, avoiding all of the roads I knew were closed ... and hit another one I wasn't aware of! Luckily I know the city about as well as I know my own house, so I was always able to find an alternate route and my house never lost power. It was a bit frustrating, but all in all, I was very fortunate. Things could have been much worse ... and for a lot of people, they were.