My Life Recently Has Been One Looooooong Monday Morning 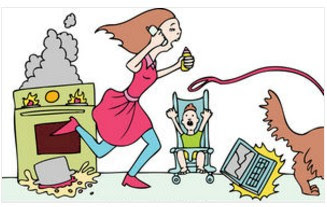 When I drove to Missouri to pick up the play kitchen for my grandkids (to play with once they are old enough), I noticed the heat was coming out of the vents up front, even though I had it turned off. Later I realized that I couldn't turn the heat on and off up front, but it came out when I drove. The faster I drove, the more the heat came out. The back of the van had heat, but not the front. I could live with that, even though it was pretty cold, but I didn't have a defroster in the front, and that concerned me. I was told it would be $500-$800 to fix, that the whole dashboard had to be pulled out, etc. I decided to just try and live with it a little longer.

Saturday morning I picked up my grandbabies for my family Christmas. When I put my grandson in the back, the blower was blowing cold air. "Great", I thought. "Now I don't have any heat at all!"

My son-in-law looked at my van. The part I needed was $18. He had to pull out the glove box, but not the entire dash. I was also very low on anti-freeze. I now have heat, front and back, and can control where the heat goes ... feet, windshield, etc. I only have one setting for how hard it blows in the front, but it's pretty high, so I can live with that.

After picking up the babies, my gas light came on. I was almost on empty, but I couldn't stop for gas because I lost my debit card last week. I called the bank as soon as I noticed it. The last charge was from me, so it hadn't been used (yet). They cancelled that card and said I would receive a new one in 7-10 business days. I haven't received my new card yet, so I hoped I had enough gas to get to work, then the bank, and then the gas station on Monday.

During the winter, I always open my garage door and let the van warm up for a bit before I have to go anywhere. I have a spare garage door opener in my room and my van has a remote starter. I can hear the door open and close from my bedroom, but when I attempted to open the door this morning, it wouldn't budge. I called my bosses to let them know I'd be late, then I called in the cavalry. The door was frozen shut. As soon as he broke the "seal", the door opened. However, the opener in my car won't close it. The car opener opens it, it just won't close it ... another oddity I'll have to live around for a while!).  Fortunately, the button on the wall works, so ... after I drove out of the garage, I went back inside to close the door, then left through the back door. Quite handy!

My gas light was still on (the gas fairies never visit me!), and I wasn't sure how much longer I had before I ran out of gas entirely. The windchill this morning was 0°, so this in not a good morning to find out how low the gas gauge can go before I'm stranded on the side of the road. The van ran quite a bit over the weekend when they were working on the heat both Saturday and Sunday. Since I can't get any money out of my account until the bank opens, I raided my change, and bought $10 of gas on the way to work ... in quarters.

Posted by Jackie Coleman - Author at 9:18 AM