To Kill a Mockingbird Banned 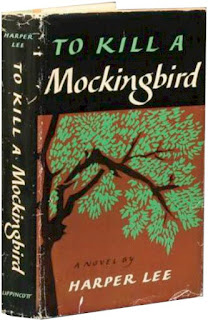 To Kill a Mockingbird by Harper Lee and The Adventures of Huckleberry Finn by Mark Twain have been banned by a school district in Virginia after one parent ... of a high school-aged son ... was traumatized by the use of racial slurs in the novels. I have never read The Adventures of Huckleberry Finn, but I have read To Kill a Mockingbird. And it is one of my favorite books of all time.

Around here, To Kill a Mockingbird is required reading in all the high schools. My kids all had to read it, but they already knew what would happen. They were all in elementary school when I read the book. As soon as I finished reading it, I rented the movie. (Keep in mind this was back in the olden days, before you could watch every movie ever made online.)

I wanted my kids to know what this book was about. It wasn't about the n-word peppered throughout the book, it was about one man, Atticus Finch, who fought for justice and defended an innocent black man. The moral of the story isn't how many times the n-word was said ... the moral of the story is that you need to do what is right, even against all odds, and even when everyone else despises you and tries to harm you for doing so.

One line in the book gave me shivers. It was when the Scout and Jem watched the trial from the balcony with the town blacks. By the time the trial was over, the kids were exhausted, watching from between the balcony spindles. The courtroom is empty, save for Atticus and the blacks in the balcony. After Atticus finishes packing his briefcase, he starts walking out of the courtroom. As he does, one of the blacks sitting by Scout and Jem tell them, "Stand up children. Your father's passing."

Both of these novels are historically accurate in their speech. I can't speak for The Adventures of Huckleberry Finn, but I do know that the moral of the story of To Kill a Mockingbird and the lesson it teaches reaches beyond one offensive word. In fact, it wouldn't be as effective had they not used the word.

Snowflake is an appropriate word to describe the young generation. They are so fragile and easily broken that they need crayons and Lego's and therapy dogs when something offends them or they don't get their way. It is a parents job to protect their children, but it's also their job to prepare them for life in the real world. Shielding them from every disappointment and rewarding them with trophies they didn't earn sets them up for even more disappointment when their mediocre efforts are no longer enough. They expect a reward regardless of whether or not they've earned one.

When I was growing up, you got a trophy or ribbon for first, second, and third place, and occasionally, for 4th place as "special mention. If you wanted to be rewarded, you'd have to work harder and do a better job next time. Those rewards, or lack thereof, taught us that hard work and dedication are the way to achieve success. Sometimes those awards were peer-voted, merely a popularity contest. Those awards taught us that life isn't always fair ... because it isn't. Those experiences prepared us for the real world. We were taught to dream and reach high. We were taught that if you fail, get up and try again. When we misbehaved, we were spanked ... not beaten ... spanked ... at home, at school, and even at another kid's house. Those spankings were the consequence of our actions. It doesn't take too long, for most, to learn to behave. We didn't wilt or give up. We strove to do better.

Today's Snowflakes don't want the world to be unfair. They don't want anyone to think or act or talk differently than they do ... and it offends them, sometimes to the point of legal litigation, if someone does. The parents of Snowflakes have failed at the most important task given to them.

I suppose I shouldn't be surprised that To Kill a Mockingbird has been banned ... but it does. Everyone is so worried about damaging the psyche of these delicate beings that they bend and knuckle under every time one of them pouts. The world shouldn't revolve around their tender feelings just because their parents failed to teach them how to lose with dignity or accept differing opinions.

My kids, I'm happy to say, are not Snowflakes. I didn't allow them to be disrespectful to me, each other, or anyone else. I didn't rush in and save them from every consequence ... and that is a very hard thing for a parent to do. I didn't force them to be the best, but I encouraged them to give their best and have fun trying. I held them when they cried and I gave them advice. They aren't perfect, and they've had their share of failures and disappointments. And I've always been there to comfort them and tell them what to do for a better tomorrow ... and it never involved litigation.

I was strict, but not mean. I live by the rules of the world and I expected them to live by those rules, too ... I didn't expect the world to change because my kids got their feelings hurt.

Right now, it's just one school district in Virginia who has banned two pieces of classic literature. I expect many more school districts to follow. And, sadly, I expect the list of banned literature to grow until children are taught nothing but fairy tales and the parts of history that are pleasant.

Be warned, as a wise man once said, "Those who do not learn from history are doomed to repeat it."
Posted by Jackie Coleman - Author at 1:00 PM