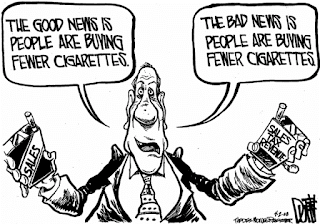 This fall, three cities in California and one in Colorado passed a law requiring additional taxes on soda. In California, the tax is 1¢ per ounce, in Boulder, it's 2¢. Several years ago, states enacted a tax on cigarettes. I predicted then that as more people quit smoking, the taxes would just move to something else, and I was proven correct. If the higher taxes on cigarettes prompted people to quit, then that's good. But all the people who thought the tax was a good way to get people to quit faced a double-edged sword when it worked and their cigarette tax cash-cow died. As cigarette tax revenue fell in my hometown, fast food was taxed 1% higher.

There will always be another "sin" to tax, and pretty soon, it's going to hit everyone. Municipalities become dependent on these taxes, so they never go away. I would caution people to be careful what sin tax they vote into law. Today it's cigarettes and soda, something the people in those four cities find disagreeable, but eventually, those taxes will move to something they do approve of. And when they find themselves on the receiving end of those taxes, they won't be very happy.
Posted by Jackie Coleman - Author at 12:53 PM