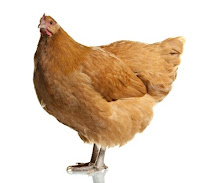 A chicken crossing the road snarled traffic during rush hour in San Francisco recently. Three people have come forward claiming to own the  chicken, so the animal shelter where the chicken is being incarcerated has requested photographic evidence to prove ownership.

Most chickens of the same breed, by design, look identical (to me anyway). I went to a dairy farm on a field trip with Thing 1's pre-school class one time, and they had all the cows named, claiming they could tell them all apart. Maybe they can, maybe they can't ... but I couldn't tell any difference ... nor would I have known if the cow they were referring to as Marge was Marge or Gertrude!. They could have paraded the same cow in front of me and told me it was Marge or Ruth or Gertrude or Henrietta and I would have been none the wiser.

All this fuss over a chicken ... and yet no one bothered to ask, and finally get a definitive answer to the question that has been puzzling humans for decades ... why was she crossing the road?

Posted by Jackie Coleman - Author at 6:10 AM