Whoever Invented This is a GENIUS! 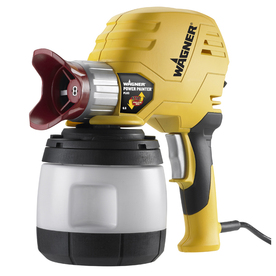 Whoever invented the paint sprayer was a genius! An absolute GENUIS who should have his own holiday!

When I told Superman we were going to paint the house over Labor Day weekend, he was skeptical that it could get done. He ran to Lowe's to get some lumber to fix the porch header and picked up a paint sprayer.

I was up on the back roof painting when he returned. He put the paint sprayer together and sprayed a section of the house ... and painted more in a few seconds than I had painted in the last half hour!

I was so happy I nearly cried!

Before starting this monumental job, I figured we'd end up renting a paint sprayer. After seeing how long it was going to take to paint by hand, I'm positive I would have either rented or bought one. This little beauty worked flawlessly.

Thing 1 has always said if I ever want to sell the house, she and her husband will buy it. Well, I did find another house ... less than half the size of this one, but perfect for me at this stage of my life. We're hoping to close on both homes in the next week or two. Hallelujah! They plan on siding the house, but until they do, it will be all white. No trace of pink shall remain.

I have wanted to paint the house a different color since before I bought it in 1999. The house was pink when I bought. Yes ... pink ... and I hated the color! The color is typical of what homes built in 1909 might have been painted, but who chooses that color nearly one hundred years later? The answer is the wife of the couple who owned the home at that time. I'm putting most of the blame squarely on her shoulders, but the husband who agreed to it shares culpability for being unable to tell her "OH, HE** NO!". The house is so tall that painting it seemed like a lot more than we could take on ourselves ... especially since I have a paralyzing fear of heights ... and expensive to have someone else do, so I kept putting it off. But, this weekend we bit the bullet and dove in headfirst.

I figured we'd scrape off whatever paint we could and just paint those areas, then finish painting the rest of it over the course of several weeks ... but the paint sprayer is allowing us to do it all in one weekend ... one three day weekend, that is. Thing 1, her husband, one of his friends, myself, Superman, and to a lesser extent, Thing 3 and a friend of his have been working on it. (Thing 2 has been suspiciously absent the entire time.) We're all sore, stiff, and walking funny, but we're soldiering through the pain and getting it done.

This Labor Day has been anything but fun and relaxing, but so worth it! We'll finish up today! YEA!!!!! I'll take pictures of it completely finished, but here's a teaser of one before and a few during pics to hold you over. We started power-washing and scraping Thursday evening after work and resumed scraping on Friday. The rest of the scraping and all of the painting was done in one day! The pictures below were taken Saturday morning, after just one day of painting.

Posted by Jackie Coleman - Author at 5:41 AM