Dinner For A Year 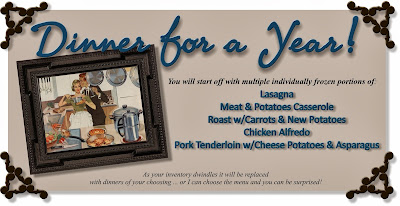 My boyfriend has so many amazing qualities. People who know me probably get sick of me singing his praises, but I can't help it! I know he's not perfect, but I can honestly say he comes closer than most, and I am a better person for having known him. Sometimes I have to pinch myself to make sure I'm not just sleeping and have dreamed him up!

One of the qualities I admire most about him is his desire to give to others. He is one of the most generous people I have ever known. I'm not just talking about gifts to me, or to those close to him ... he faithfully gives to charities and people in need. I've gone with him to pick up a furnace he bought for a family whose furnace went out. He gave his spare refrigerator to a family he heard about who needed one. Granted, he didn't need it, but he was using it. He buys Christmas trees, ornaments, and presents for families who can't afford them. And he does so anonymously. I've seen him buy a huge bag of cheeseburgers and go looking for homeless camps to pass them out. He's not doing it for praise or adoration or even a thank you. He gives because there is a need. I have never met anyone who has a more generous spirit or had a kinder heart.

He loves to give ... he's just not very good at receiving. He doesn't really need anything, but I'm always able to find some pretty cool gifts for him. It doesn't matter what I get for him, he always thinks I spent too much.

This year, he told me not to buy him anything (fat chance!). He said "Don't get me anything ... just cook me dinner."

He HATES to cook. By the time he gets home from work, he's exhausted, and the thought of cooking seems monumental. He comes home from work and stands in front of his refrigerator or freezer and stares inside ... and you can literally see the energy drain out of him.

And that's just what I did! I found some individual serving containers that can go from the freezer to the microwave. They have flat lids that sit on top of the food, so there is no "air gap" to cause freezer burn. Thus, the meals will be as tasty months from now as they were the day they were frozen!  And, being flat, they stack neatly in the freezer.

The week before Christmas I spent the evenings cooking and freezing thirty individual meals. As he works his way through those, I will replace them with others. And, so that he would have something to open, I made the coupon (above) for him. It makes my heart smile to know that he will never have to wonder what to cook ... his only decision will be what to eat!

That wasn't all I gave him, of course, but the other gifts were small. He appreciated everything he got, and as usual, thought it was too much. He would much rather give than receive, but I told him he's just going to have to figure out a way to enjoy receiving, because I'm never going to stop thinking of thoughtful gifts to give to him :)

He doesn't know it yet, but it's not just dinner for a year ... it's dinner for life ... because I plan on making sure his freezer is full of yummy, homemade meals for the rest of my life.