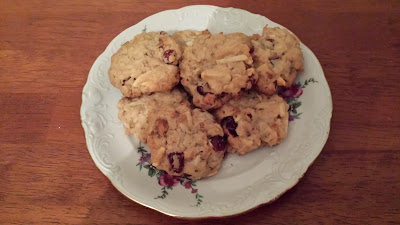 My boyfriend routinely declutters, so how he manages to find more things in his house to throw away never ceases to amaze me. Last weekend he held up a shiney gold tin. It was round, and slightly larger than the average cookie.

"Can you think of anything I could use this for?" he asked.

I smiled and said, "Well, you could give it to me and I could fill it full of homemade cookies for you."

He liked that idea!

I planned on making chocolate chip cookies with walnuts, but then I remembered him raving about a cranberry granola cookie he discovered when he was at his cabin down south. He's only been able to find it in the bakery of a grocery store down in Georgia. They were out of them when he and I went there in October, so I didn't get to taste one. Without knowing what the cookie looks or tastes like, I decided to surprise him with my version of  those cookies.

I glanced over a recipe I found online and headed to the store. The recipe didn't have any nuts in it, but I bought some almond slivers to throw in (he loves nuts in his cookies!). I also grabbed a bag of coconut, which was also not in the recipe. This particular recipe called for applesauce in lieu of sugar for sweetening, but I used brown sugar anyway. Cookies are supposed to be indulgent ... not nutritious!!

The only resemblance to the recipe online and my cookies was the amount of granola, flour, and eggs. My daughter tasted one and said it was yummy, so I filled the tin with still-warm cookies and drove to his house to deliver them. I poured him a glass of milk as he ate his first cookie. He claimed to love it and quickly ate several more. I hadn't tasted them, so I didn't know if they were really good, just so-so, or barely edible! He seemed to like them ... or was doing a good job of pretending to! I kissed him good-bye and headed home.

I kept a dozen for myself and took some to work the next day. I sat at my desk sipping coffee and going through my email, and reached for a cookie ... and I fell in love before I finished chewing the first mouthful! These cookies were really, really good. I knew I'd found my new favorite cookie ... but please don't tell the Snickerdoodles I said that!!