The average total accumulation of snow around here each winter is about 8". It usually doesn't come all at the same time and it typically doesn't stick around very long. It has snowed as early as November and as late as March, but those are rare occasions. We generally don't see any snow until late December, and rarely get snow past early February. And, since we don't typically stay below freezing very long, the snow doesn't usually stick around very long. (Good!!!)

We got around 8" of snow from winter storm Cleon in December (2013). It has since melted (yea!), and the temperature is supposed to be in the 60's by this weekend. Yea! But, after the 8" of snow from Cleon, school was out from Friday through Tuesday, with a 2-hour delay on Wednesday. Our mayor declared a State of Emergency, telling people to stay off the roads unless it was an absolute necessity. (I'm sure any northerner reading this is rolling their eyes, laughing at us, and calling us names!)

Don't worry ... I'm not offended. I freely admit it ... when it comes to snow, we're hicks. It's safe to say that in these parts, we don't handle snow very well.

So you can imagine the chaos when we got 22.3" of snow on December 22nd and 23rd in 2004! The interstate that runs around the northern edge of the city was closed down, stranding motorists in their vehicles. Farmers took their tractors to the interstate and highways to ferry those stranded to safety. And, it was bitter cold ... it was -11º on Christmas Day that year. We don't generally dip that low. We might have a few days in the single digits, but temperatures below 0º are extremely rare here. (Good!!!)

The snow was frozen solid. I was basically trapped in my house. The snow plows came through and cleared what they could from the roads, but that didn't help me at all ... in fact, in made it considerably worse! My vehicle was trapped in my driveway, at the end of which stood a gigantic pile of snow the plow pushed there.

My oldest daughter and I braved the cold one day and managed to clear a path from the house to the driveway, but the snow/ice at the end of the drive was proving impossible to. Luckily a Good Samaritan came by with a snow plow attachment on his truck and cleared the drive in minutes. We were quite grateful, as there was really no way we were going to be able to bust through that snow/ice.

Here are a few pictures of the snow that year. I post these with a silent prayer that we don't ever see that kind of snow again in my lifetime! 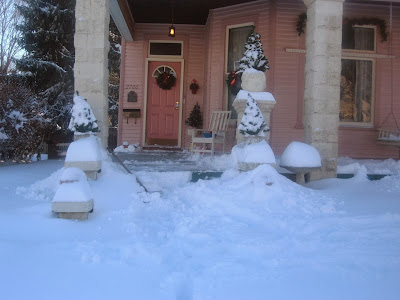 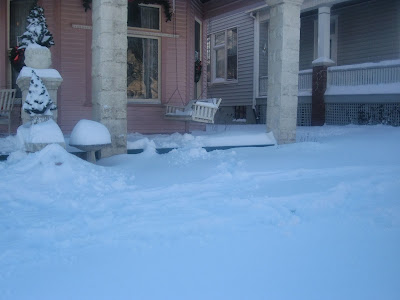 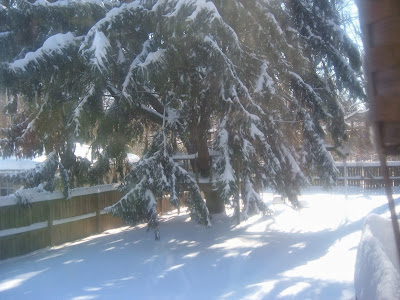 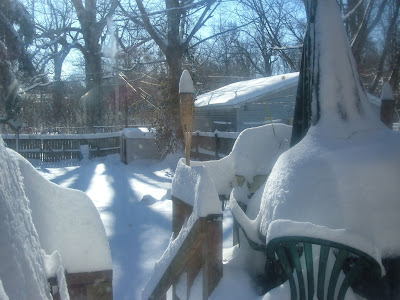