Introducing ... The Exclamation Comma and The Question Comma 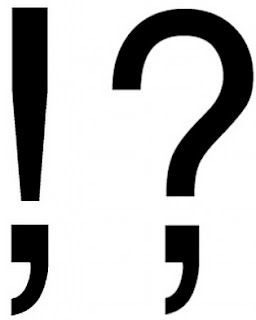 In 1992, three American geniuses "invented" the exclamation comma and the question comma.

The exclamation comma is "for use within a written sentence between words as a comma, but with more feeling". Likewise, the question comma is for "expressing a question before a sentence has ended".

One of the co-creators of the two punctuation marks wrote about how he came up with the idea in a post on his Facebook page.

"During a long period writing a technical paper in the early 90s, I was startled in my sleep at 4am when an image of a question mark with a comma below it (instead of a period) suddenly appeared in my mind’s eye. I sprang up in bed yelling, eureka!, so loud that I scared my wife awake. It was the first time I distinctly remember discovering an invention by being startled by such imagery while asleep."

They might have had a small glimmer of sustainability (not really) had the punctuation marks ever made it to a keyboard, but they never made the cut. I suppose we could have replaced the rarely (or never) used carrot (^) and tilde (~) ...  but if we got rid of the tilde, how would we make an old-school emoji of sticking out your tongue? :)~
Posted by Jackie Coleman - Author at 9:10 AM