I Don't Think My Step Tracker is Very Accurate 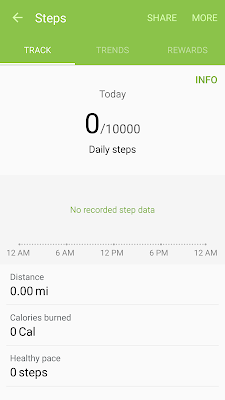 One morning last week, I woke up at 3:00. I went to the bathroom, then went back to bed and snuggled into my warm, comfy bed, but sleep eluded me. I got up made coffee, then went back to my room to nerd, getting up several times to use the bathroom and/or get more coffee ... and to grab some cinnamon graham crackers to snack on! After I had finished reading the morning news and had written a great deal, I got up, made my bed, and took a shower.

As I was getting dressed, I checked to see how many steps I had taken so far. I'd been up several hours earlier than usual ... on a day I could have slept in ... and I was excited to see how much of a head-start I had towards the 10,000 steps it demands I take everyday.

Imagine my surprise when, after I'd been up and moving for seven hours, the step-tracker app on my phone read ... 0 steps!

I had walked around for seven hours and I it recorded zero steps! Okay, so I wasn't actually walking for seven hours, but I did get up and walk numerous times. Granted, I was sitting most of the time, but I had easily walked several hundred steps. I'm not asking for much. I don't want it to lie to me and tell me I've walked 10 miles when I've really only walked a hundred feet ... but I do want it to accurately record the steps I do take.

Unlike Wolowitz on The Big Bang Theory, I haven't attached my phone to a device rigged to mimic walking or riding a bike! I'm not cheating, and it doesn't seem quite fair that my app ... who pesters me to get moving ... is too lazy to wake up and record my steps!

If that's all the better it can do, I've decided I'm going to quit berating myself self on the days I don't live up to it's standards ... because, quite frankly ... it's not living up to mine, either.
Posted by Jackie Coleman - Author at 11:04 AM