"Pastafarian" Get to Wear Colander on her Head for License Photo 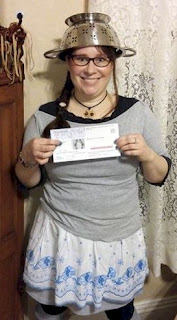 Boston, Massechusetts allowed a woman who belongs to the "Church of the Flying Spaghetti Monster" to wear a colander on her head in her driver's license photo after she cited her religious beliefs.

She said she absolutely loves the history and the story of Pastafarians. The only "story" I could find was that whenever a scientist carbon-dates an object, a supernatural creator that closely resembles spaghetti and meatballs is there ... changing the results with His Noodly Appendage. 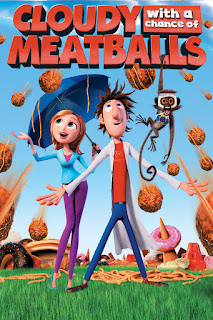 I have to admit, that is a compelling story (not really). Maybe they should write a book. Oh, yeah ... they already have! My daughter loved that book ... and the movie!

If this woman honestly believes this stuff, she's got much bigger problems, and should focus on those rather than using her limited brain cells fighting to wear a colander on her head.

Joking aside, this is part of what is wrong with America. I couldn't find the origin of this "religion", but it sounds like something that took root at a college fraternity ... with the help of hallucinogenic drugs ... and the "followers" used our laws against us to get it recognized as a real religion, with constitutional protections.

More concerning than any of that is the fact that (I'm ashamed to admit) I used to have the exact same skirt the "Pastafarian" is wearing in the photo ... but I didn't pair my white skirt with bright blue flowers with another skirt underneath, a gray and black long-sleeved tee, black leggings, and boots. My daughter borrowed it once, and I never saw it again. After seeing this woman in it, I would never wear it again anyway ... so I'm glad that skirt is gone forever!
Posted by Jackie Coleman - Author at 11:39 AM