Being the oldest of the four little kids, my one sister never assumed the role of middle child. She went straight from being the pampered baby to the demanding oldest child the moment I was born. My next youngest sister was one of those nearly perfect children that siblings would have hated had she not been so darn sweet and genuinely kind. The youngest was not only the pampered, spoiled baby of the family ... she was also my pampered and spoiled baby.

So, where does that leave me? Square in the middle ... stuck between Attila the Hun and Jesus! To say I never received preferential treatment would be an understatement of monumental proportions. 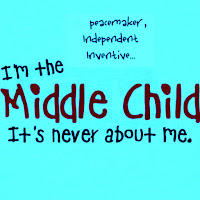 I don't recall ever fighting with my two younger sisters, but my older sister and I had some real doozie's. When necessary, my parents stepped in to referee ... and sided with my sister. Every. Single. Time. My parents were always telling me to give in to my sister to "keep the peace." Screw peace ... I wanted justice! (I really wanted revenge, but I would have settled for justice!) But, I always caved to "keep the peace". Except once. When I was eighteen, I held my ground. I would not budge. I refused to "keep the peace". I'd been "keeping the peace" for almost nineteen years! And for the first time in my life, I got my way. As adults, we're friends, but as children, my sister and I were often mortal enemies.

To be fair, I was sometimes the instigator of our quarrels. I knew all the right buttons to push to get her to explode. Sometimes I would push them ... not because I was mad at her ... it just to see steam pour from her ears and fire shoot out of her eyes. As the middle child, I had a very limited arsenal, so I used what little I had to my best ability.

As the middle child, everything was my fault. My older sister would not admit guilt if her life depended on it. She would blame me and I would be grounded. If it was ever a question about which one of me or my little sisters did something, I was convicted. I accepted those sentences ... because if the three of us were ever the suspects, I probably was the guilty one!

So, for one day a year, I am the queen! I get my way! I don't have to keep the peace! Sounds pretty awesome ... except I'm the only one who knows what today is!
Posted by Jackie Coleman - Author at 5:20 AM