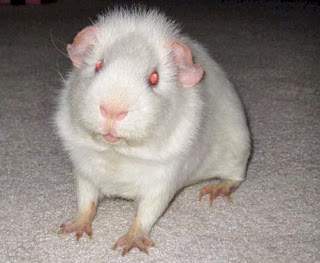 To come to this ground-breaking discovery, they exposed a group of female albino guinea pigs to sound equivalent of a rock concert for one hour on two occasions. They gave half of the guinea pigs 25mg of caffeine for fifteen days. The other half received only water to drink. After eight days, the water-drinking guinea pigs hearing had recovered almost completely, while the caffeine-addicted guinea pigs still had difficulty.

I found the most interesting part of this article was when I was trying to figure out how they came to the conclusion at the caffeinated guinea pigs were having trouble hearing. I guess they're keeping that nugget of wisdom to themselves, so if you have a guinea pig and wonder if it is hearing okay, you're going to have to figure out a way to do that yourself!

They stated that avoiding coffee or soda after a concert or particularly noisy encounter, you could be doing a lot of damage to your ears. Honestly, I find this study hard to believe. I have three kids who produced more noise than a Rolling Stones concert ... every day. All. Day. Long. If that kind of noise coupled with caffeine consumption caused hearing loss, there wouldn't be a parent or teacher anywhere in the world who could hear!
Posted by Jackie Coleman - Author at 10:09 AM